For Christians, Christmas formally began in the third century A.D., but many of the most famous traditions — reindeer, trees, snowmen, etc. — emanate from the celebration of winter solstice in pagan cultures.

With over 2,000 years of dual history backing it, you’re bound to discover some surprises along the way. So in the holiday spirit, here are 37 Strange, Bizarre and Hilarious Christmas Facts Yule Not Believe. Let’s get started!

1. Mistletoe, or as it is more well-known Viscum album (kidding), means “dung on a twig” in the Anglo-Saxon. According to the National Wildlife Federation, it spreads through bird droppings. Think about that during your next kiss. 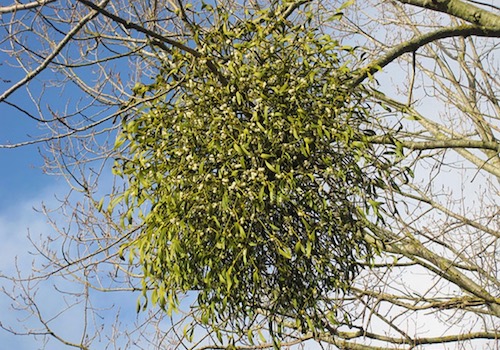 2. PopSci estimates Santa Claus would have to travel an average speed of 5.083 million miles per hour based on a 24-hour cycle to hit each household on Christmas Eve. It bases this on 2.67 children per household, with 75 million households worldwide. The speed of light is 671 million mph. So if we ever get there, presents for everyone! 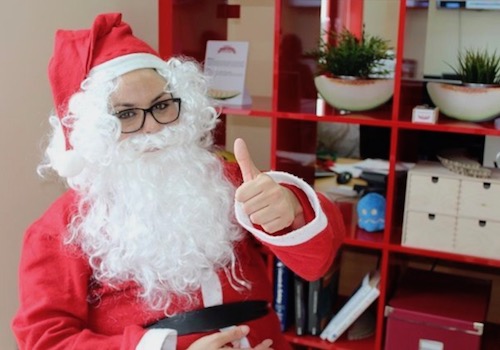 3. Author Roger Highfield’s 1999 book The Physics of Christmas: From the Aerodynamics of Reindeer to the Thermodynamics of Turkey details the darker side of Rudolph’s red nose. No, it’s not alcoholism, but some kind of parasitic infection. ABC News has the more technical explanation.

4. Astronomer George Banos wrote in a 1979 academic paper — reported here by the BBC — the Holy Star of Bethlehem, signpost of Christ’s birthplace, was the unfortunately-named planet of Uranus. It could have been a comet, too, but Uranus is funnier. 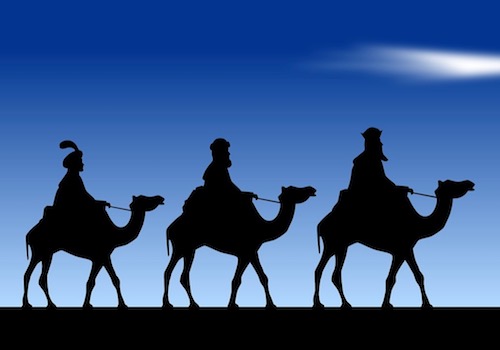 5. The restaurant Denny’s, known for its “always open” motto, decided to give employees the day off in 1988. The only problem was 700 of the franchise’s then-1,221 locations had no locks per the policy. Thankfully, corporate was able to come through with last-minute installations.

6. A 2014 survey from Japan-based online retailer Rakuten found three-quarters of Americans didn’t like their holiday gifts with one-third choosing to regift, 27 percent donating to charity, and 14 percent cutting their losses and selling while the item still had value. 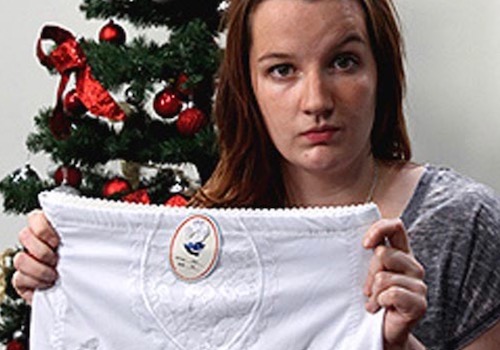 7. The American Research Group estimates the average American will spend $983 for 2017 on holiday gifts. Applying the previous finding that 75 percent of people hate their holiday gifts, that means around $737.25 will be wasted on unwanted gifts.

8. Data analyst David McCandless analyzed more than 10,000 Facebook status updates and found that approximately two weeks before Christmas is the most likely time that a man or woman will dump their significant other. That said, if you can make it until Dec. 25, you’re probably okay. It is the least likely day. 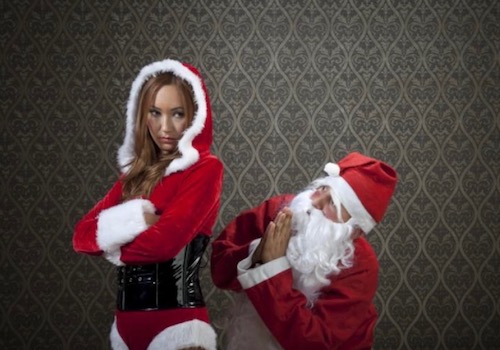 9. A recent survey from U.K.-based online retailer Matalan found more than four in five respondents (82 percent) owned a Christmas jumper or sweater. The 25-34 demographic were most likely to purchase. 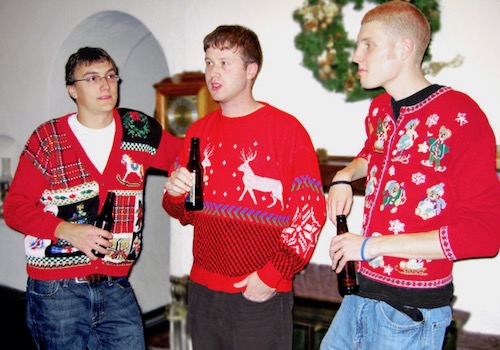 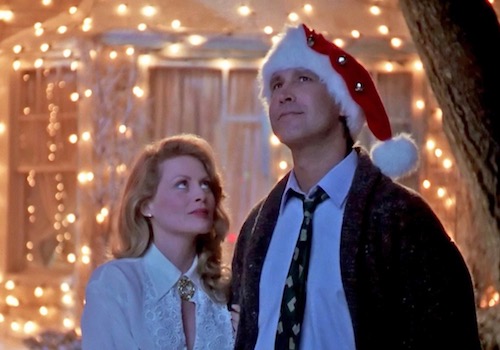 11. Associated British Foods did a study — reported here by ABC News — that found the average American consumes 7,000 calories on Christmas Day, over three times the U.S. Department of Agriculture’s recommended daily intake. Most of the damage comes from two large meals and nibbling throughout the day. 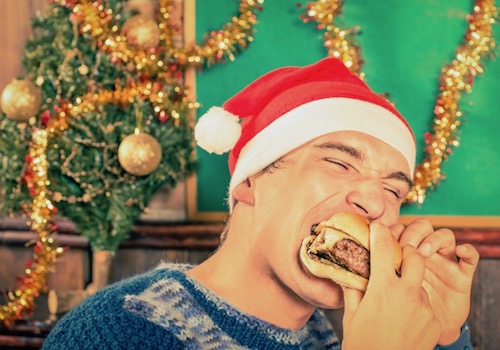 12. A U.K. research team did the food math and found if Santa visited 640 million homes every Christmas Eve, he would consume 150 billion calories. If you lived 80 years on a 2,000-calorie-per-day diet, you would have to live approximately 205,480 years to match that.

13. The financial experts at Forbes calculated Santa Claus’ net worth and concluded he would have to be worth around infinity to pull off everything he does. That makes him the richest person in the world, fictional or otherwise.

14. Filmmaker Bob Clark made two of the most well-loved Christmas movies in their respective genres: A Christmas Story is the “shoot-your-eye-out” tale of a boy and his quest for an elusive Christmas present; Black Christmas is about a maniac in a sorority house. The guy had range! 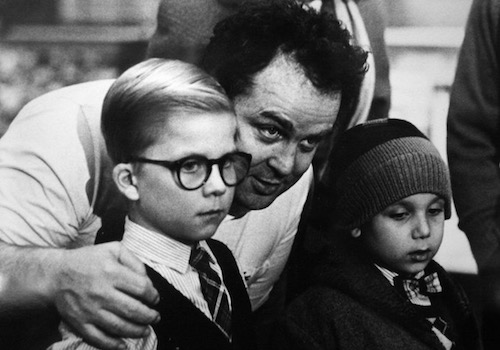 15. According to the Chicago Tribune, film funnyman Jim Carrey was so uncomfortable in his Grinch costume for 2000’s live-action adaptation of the Dr. Seuss classic, he likened it to being “buried alive,” and hired a NavySEAL to train him in torture resistance so he could endure wearing it. 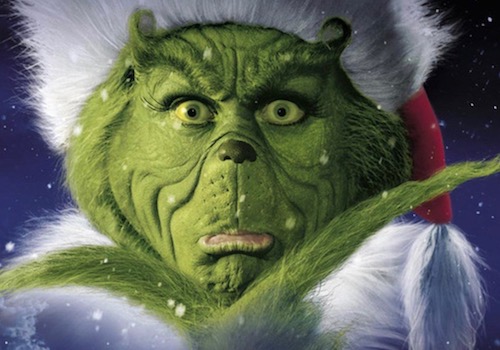 16. Santa Claus has inspired more horror films than famous screen boogeymen Jason Voorhees (Friday the 13th, 12 films), Freddy Krueger (A Nightmare on Elm Street, 9), and Michael Myers (Halloween, 9). The AV Club ran down 18 a few years ago, and these don’t even count recent flicks like All Through the House, Secret Santa, or anything Krampus-related. 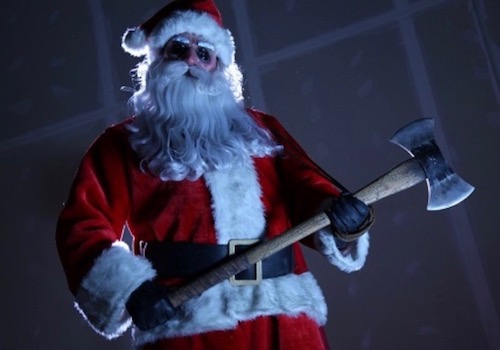 IMAGE: The Daily Sheeple, from the film Silent Night (2010) 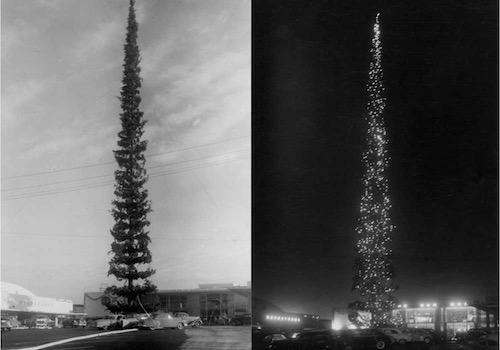 18. Guinness World Records also records the world’s tallest snowman — or woman, rather. Residents of Bethel, Maine, pitched in on the 122-ft, 1-inch tall creation who measures just a few feet shorter than the Statue of Liberty (also a woman). Girl power! 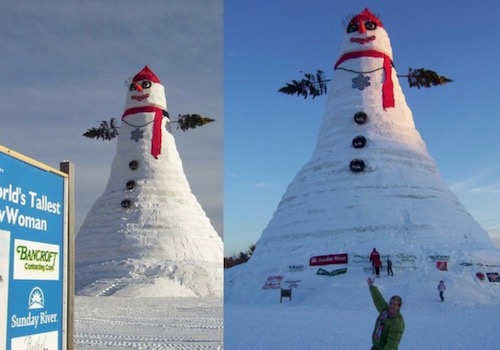 19. At 225 tons, the Statue of Liberty is the world’s heaviest gift. France constructed it and gave it to the U.S. in late October 1886 as an early Christmas present.

20. The Italy-based emergency services organization Pubblica Assistenza Carrara e Sezioni in Carrara, Tuscany, Italy, captured the world’s longest Christmas stocking title from GWR on Jan. 5, 2011. The final size was over 168 feet in length and more than 70 in width (from heel to toe). 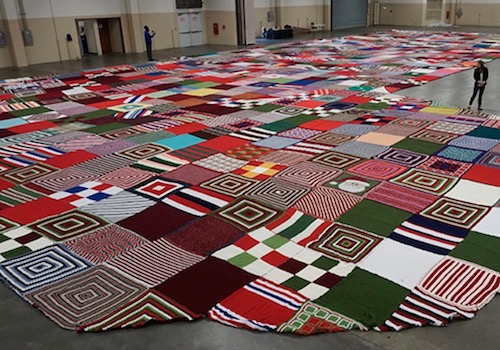 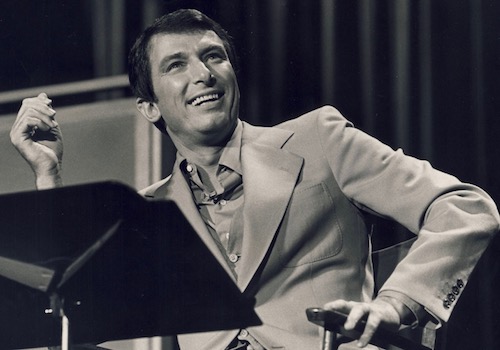 22. Each year since the 1970s, millions of Japanese families have celebrated Christmas Day with a “Party Barrel” from Kentucky Fried Chicken. According to the BBC, a local-to-Japan KFC restaurant owner dreamed up the idea, and the company took it national in 1974. 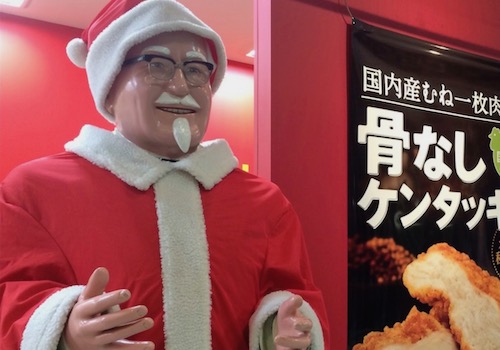 23. If you’re tired of the same old boring Christmas games, break out the Victorian-era classic, “Snap-Dragon.” Here’s how it works: soak a bowlful of raisins in brandy, set it on fire, then take turns pulling out handfuls and swallowing them whole. Better keep a fire extinguisher handy, though! 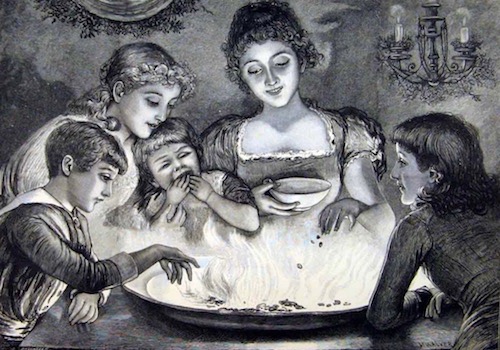 24. What we know about “Hot Cockles” comes from the book Sports and Pastimes (1801), written and illustrated by Joseph Strutt. How to play: place your head in another player’s lap while others kick or hit you from behind until you guess their identity.

25. “Takanakuy” is a Peruvian Christmas tradition also known as the “Fighting Festival of Peru.” It’s exactly what it sounds like. Members of the community duke it out to settle old scores or display machismo. It originated in the Chumbivilcas Province, according to Oddity Central.

26. North American Aerospace Defense Command (NORAD) started Santa Tracker in December 1955 by accident, NBC News reports. A local department store had a typo in their newspaper ad misdirecting children to call NORAD instead. The organization has assigned one colonel to answer calls every Christmas since.

27. In 1982, Canada Post assigned Santa the postal code of H0H 0H0. It has received an annual letter volume of 1 million ever since, addressed to Santa Claus, North Pole, H0H 0H0, Canada.

28. The Catalan Region, Spain: Tió de Nadal, or “Christmas log,” is a hollow log with stick legs and other decor. From Dec. 8-24, children “feed” him nuts, dried fruit, and water each night. On Christmas Eve, Slate notes, they beat him with sticks until candy falls out, earning him the dubious nickname of “defecating log.” We poop you not. 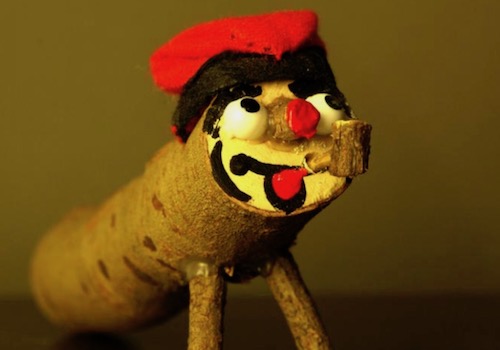 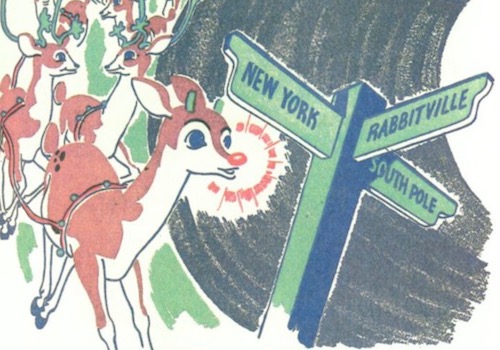 30. The first link between Santa and sleigh comes from an 1809 piece by author Washington Irving, well-known for creating the Headless Horseman. Irving’s St. Nick travels in a wagon. Most historians now agree this evolved into the sleigh depicted in 1823’s “A Visit from St. Nicholas” (aka “’Twas the Night Before Christmas”). 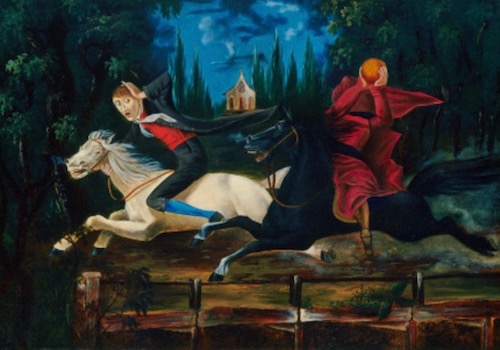 32. Yes, Nazis celebrated Christmas, but with their own dastardly Nazi flare. As Co.Design writer John Brownlee notes, “It was not uncommon to hang replica grenades and machine guns on your Christmas tree during the Nazi years.” They also used the swastika as a tree topper.

33. Snopes has a detailed rundown on the confusing history of Donner and Blitzen. They, along with six of Santa’s other seven reindeer (sans Rudolph), made their first appearance in “A Visit from St. Nicholas.” But long story short: early versions of the original poem named them the more inebriated-sounding versions of Dunder and Blixem.

34. Like most authors, Clement Clarke Moore was his own harshest critic. The intellectual professor wrote “‘Twas the Night Before Christmas” for his kids, but did not publish it under his own name until 21 years had passed at the insistence of his then-grown children. He essentially was the last person to admit writing it, historian Seth Kaller notes.

35. Do you want to hone your Santa craft? There is no more prestigious institute than the Charles W. Howard Santa Claus School to do it. The school has operated since 1937, teaching Santa history, proper dress, Santa sign language, toy making, the latest toy-and-gadget wish lists, and live reindeer habits. 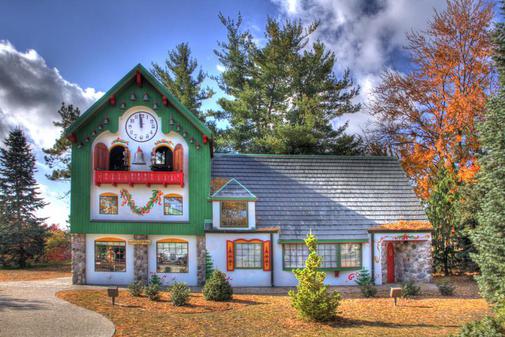 36. The Addis Brush Company, a toilet brush company in the 1930s, invented the first artificial brush tree using the same equipment they used to create their signature product. They received a patent for the aluminum tree in 1950.

Hopefully you’ve picked up several conversation starters, chuckles, and (possibly) new traditions here. What were some standouts, and what are some of your favorite holiday facts and traditions? Sound off in the comments section below! And most importantly, from our family here at The Reeves Law Group to yours, Merry Christmas!