When you think about traveling by train, as opposed to any other mode of transportation, do you normally think that it is a safer option than the car or the airplane? If you are like most people, the answer is probably “Yes.” Many people are afraid of airplanes, and we all know that the highways can be very dangerous, but when a train wreck happens, we are genuinely shocked. How could this have happened?

Our preconceptions aside, train crashes are far more common than we would like to think. Accidents happen when cars and trucks stall or are left purposely on railroad tracks, locomotive operators get distracted, or when equipment problems occur. Other crashes may be caused by confusing signals at road crossings over rail lines.

The numbers tell the story. In 2007, there were 13,236 train accidents nationwide, including crashes, derailments and motor vehicle/train collisions.

In California alone, there were 199 accidents in 2005, 189 in 2006 and 152 in 2007. These numbers, which seem high, do not even include incidents such as train crashes involving motor vehicles at road crossings.In the first half of 2008, while there were 62 train accidents in California, none of them were fatal. Then, in September 2008, the Chatsworth Metrolink wreck happened and the vulnerability of train passengers, workers and crew members to injury and death from train wrecks became glaringly apparent. It was the deadliest American train crash in 15 years.

When a train crash happens, the emotional and financial toll on victims and their families cannot be overestimated. Fortunately, the law offers some recourse for those who were injured, so that the parties at fault for the wreck bear the costs of their actions rather than the innocent passengers and employees.

If you or a loved one suffered property damage or injuries following a train wreck or other train-related incident, you may have a valid claim for your losses. The right train accident lawyer can determine if you have a good case, and can increase your chances of receiving the highest possible recovery from those responsible for the losses. The time to get started is now.

What Should I Do If I have Been in a Train Accident?

In the hours or days after an accident, the shock of being involved in such a catastrophic event may still not have worn off. You might be confused and wondering what you should do.

The public and newsworthy nature of most train crashes makes one thing almost certain; if you were injured, somebody probably saw to it that you received medical attention. With that most immediate of concerns taken care of, perhaps you could use a road map for what comes next.

Here are some things you can do to ensure you will get the best possible recovery for your injuries and property damage:

Who Can I Obtain Compensation From?

As with all transportation accidents, each train wreck is unique. The accident may have a single cause or multiple, interlinking causes. A good train accident attorney – often with the help of accident reconstructionists, engineers and other experts – can look at the facts surrounding the incident and decipher all those parties and entities that had a hand in causing your injuries and property damage. Some parties who may be held responsible for your train crash could be:

Like other transportation accidents, common causes for train accidents can include driver inattention, excessive speed, lack of adequate training and equipment breakdowns. In California, for example, about 48% of all train incidents that occurred in 2007 were caused by human factors, while approximately 5% were attributed to equipment defects. But crashes are sometimes also caused or made worse by problems unique to the train industry.

For one, the sheer size and weight of locomotives and a string of rail cars makes braking a train to avoid a crash a very slow process. As evidenced by the high number of accidents after which an engineer says something like, “I saw him on the tracks ahead but I just couldn’t stop in time,” the difficulty of stopping a fast-moving train makes some train accidents seem almost unavoidable. Couple a train’s slow braking capabilities with the fact that so many roads used by cars and pedestrians bisect train tracks and you have a recipe for disaster.

Fatigue in drivers and other train personnel is also widespread. These workers are sometimes asked to work long shifts in order to get a train turned around and back to its starting point in time for another run. Although there are regulations in place defining how long workers may remain on the job at a single stretch, these rules are not always followed. When people are tired they are more likely to make mistakes, or even to fall asleep while working.

Some train cars, like the Metrolink commuter trains used in Southern California, may be pushed from behind instead of pulled by an engine out in front of the cars. When cars that are being pushed are involved in a crash, the likelihood of derailment increases because the engine continues to push the cars forward after impact.

Some rail crossings are only infrequently used, and the fact that they are remote means that their maintenance may be neglected. Although plants and other obstructions that could interfere with a car driver’s view of the tracks are supposed to be kept clear, the likelihood of a wreck involving a road vehicle increases substantially when this is not done.

These are just some of the things unique to the train industry that can lead to a crash or worsen the effects of another type of train accident. Some of these factors can be easily controlled, while others cannot. Those that are capable of being controlled may become a basis for a a victim’s recovery when those in charge failed to take the precautions that might have avoided an accident.

What can be Recovered in a Train Accident Case? 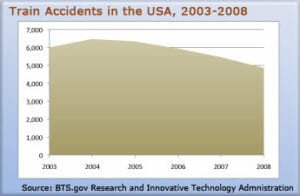 When an accident happens and you are injured, or a loved one is maimed or killed, money damages may not seem adequate to compensate you for your losses. Still, such damages can help to ease the pain and pay for the services and living needs of the victim and his or her family.

Because each crash is different, and every victim’s injuries and losses are unique, the types of damages available in each case will vary. Qualified California train accident attorneys can help you decide if you should seek damages for:

Finding the Right Attorney for your Train Accident Case

Because crucial evidence may be lost if too much time passes following a crash, it is highly important that you find the right attorney as soon as possible following the accident. A plaintiff firm with a proven record of success is your best bet.

The Reeves Law Group has litigated or settled thousands of personal injury claims on their clients’ behalf, and they can put their expertise to work on your case. Our California train accident lawyers will work hard to get you the compensation you deserve for your injuries and property damage.

When you engage the services of a Reeves Law Group attorney, you are hiring someone who knows:

If you or a loved one have been injured in a train accident, please contact The Reeves Law Group at (213) 271-9318 or email us at [email protected] soon as possible for a free consultation with an attorney.

Our train accident lawyers can help you to get what you are entitled to, allowing you to recover as fully as possible from the physical, financial and emotional trauma you and your loved ones have endured in the aftermath of a train accident.