Every year, 75,000 Americans are killed or injured while navigating sidewalks, crosswalks, and roadways by foot. These types of accidents are often caused by distracted drivers.

Drivers can typically be distracted by one of the following reasons:

If you or a family member is the victim of a pedestrian accident, a Los Angeles pedestrian accident attorney at The Reeves Law Group can help. We are experienced in helping accident victims recover financial compensation for their injuries. If you have been injured and have questions about your legal rights, contact us today.

Yet the simple act of walking along or crossing a street tragically ends in thousands of Americans being killed or severely injured every year.

Accidents caused 4,654 fatalities and another 70,000 injuries to pedestrians last year. The National Highway Transportation Safety Administration estimates that a walker is killed every 113 minutes and injured every eight minutes. Driver negligence is often to blame for these accidents, but sometimes pedestrians put themselves in jeopardy through carelessness or inattention.

According to recent articles by the Los Angeles Times, California leads the nation in pedestrian deaths and accidents. In Los Angeles, pedestrian deaths have increased by more than 80% between the years 2015 and 2017. Drivers killed approximately 74 people on foot in 2015, and that number increased to 134 in 2017, the highest number recorded in more than 15 years.

If you have been injured in an accident due to the negligence of a speeding driver, a Los Angeles pedestrian accident lawyer can help. Call The Reeves Law Group today for a free consultation.

After an accident, the injured pedestrian may be able to recover damages from the driver who caused the accident.

Damages are money paid to the victim as compensation for the person’s injuries and losses. In the event of a fatality, the family may also be able to recover money damages.

Damages also provide compensation for accidents that result in physical injuries, such as broken bones, spinal cord injuries, and head injuries, as well as for those that result in death. Recurring pain and suffering caused by the physical injuries may entitle a victim to recover compensation. An injured person may also seek reimbursement for medical bills related directly to the accident, in addition to reasonable future medical bills.

Who is At Fault in a Pedestrian Accident?

If you are involved in an accident, you must cooperate with police and other authorities and accurately report your account of the events. Even if you do not believe you were at fault for the accident, it is in your best interest to promptly consult an attorney. An experienced lawyer will advise you of the steps you should take to obtain and preserve evidence that can prove who is at fault and who is entitled to damages. A pedestrian accident lawyer can advise you on your legal options and on how to seek compensation for your injuries. 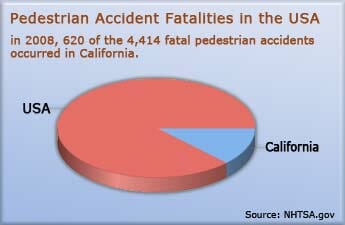 What You Can Do To Avoid a Pedestrian Accident

To reduce the number of accidents, everyone, whether on foot or in a vehicle, must take every possible precaution. With children and elders at particular risk of being in an accident, it is important to exercise care when on or near the roads.

A Review of The Reeves Law Group, Pedestrian Injury Lawyers

My parents were hit by a car when we were crossing the street. They hired the Reeves Law Group in part because their office is very close to their house in Santa Ana — more importantly, they wanted to hire the best personal injury lawyer in Orange County. Attorney Blaise Patzkowski handled their case and he did an amazing job for us. He got the insurance company to pay their full insurance policy limit. As you can see from the reviews of his other former clients, Mr. Patzkowski gets full policy limits for a lot of his clients! This is because he works extremely hard and does not back down to insurance companies. Blaise Patzkowski at the Reeves Law Group gets my vote for the best personal injury lawyer in Orange County. Very gracias for your help, Blaise.
Norma L. via Avvo
Date published: 2015-06-30

The Reeves Law Group has successfully handled a large number of pedestrian accident cases throughout Southern California for over 25 years. If you are a pedestrian that’s been hit by a car in Los Angeles, please contact us today by calling (213) 271-9318 or emailing us at Contact@RobertReevesLaw.com.