How Do Presidential Pardons Work?

Why Does the President Have the Power to Pardon Convicts?

Article II, Section 2, Clause 1, of the Constitution says the President “shall have Power to grant Reprieves and Pardons for Offenses against the United States, except in Cases of Impeachment.” The Office of the Pardon Attorney, which is part of the Justice Department, has handled such matters for the President since 1893. Presidential pardons only extend to federal crimes, not civil cases or non-federal cases.

The basis of the presidential pardon can be found in the royal Prerogative of English Kings! It was Alexander Hamilton who lobbied to include this power in the Constitution. 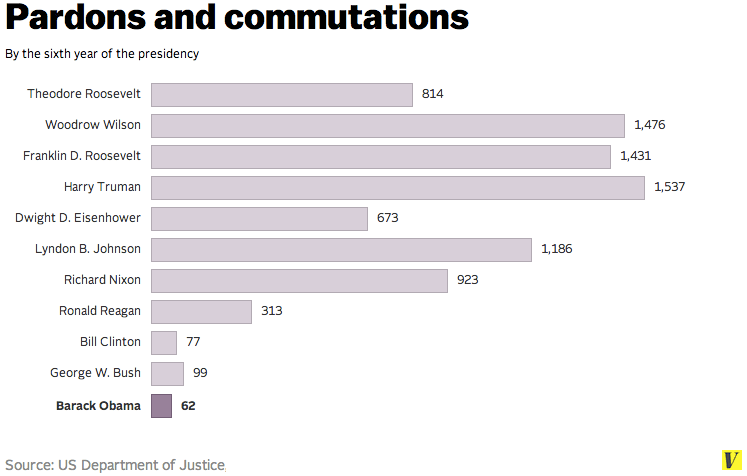 Are There Different Types of Pardons?

When a person is convicted of a felony, he loses various civil liberties — the right to vote, serve on a jury, or own a firearm. A full pardon restores all these rights. It’s as if the crime never took place.

A president can also grant a remission releasing a person from a legal obligation. This applies only to fines levied against an individual as the result of a federal case.

A commutation shortens or abolishes the sentence, but leaves intact the civil disability. Commutations are fairly rare.

A respite is a short-term action — lasting only a month or two — and allows the president to delay a sentence or execution. Usually, the purpose of a respite is to buy time to allow further consideration of a pardon petition.

Which Presidents Issued the Most Pardons?

This table shows the number of pardons issued by each President since George Washington (he issued 16). The most pardons were issued by these Presidents:

From President Nixon to Obama, these were the number of pardons issued:

Some of the more famous people who received presidential pardons include: George Steinbrenner, Richard Nixon, Jimmy Hoffa, Brigham Young, Patty Hearst. President Abraham Lincoln pardoned Arthur O’Bryan, the Washington D.C. man after he was convicted of attempted bestiality. The man was released because Lincoln felt the man had led an otherwise exemplary life, and because the man had been drunk at the time of the offense.

Can Presidential Pardons Be Undone?

The president isn’t required to explain or justify a pardon to anyone. The power to pardon cannot be reviewed or overturned by any of the other branches of government. There is basically no way to block a presidential pardon.

What Stops A President from Just Pardoning All His Cronies?

Congress has a particular incentive to curb the President’s power of pardon when it is investigating the President or his administration. Although a president can grant pardons to members of his Administration who refuse to testify before Congress, the Supreme Court has held that Congress’s power to hold its witnesses in contempt lies outside the president’s pardoning power. This means that witnesses hauled before Congress can be jailed in contempt for refusing to testify, and cannot be rescued by a presidential pardon. Or, prosecutors can wait until a president is out of office and then prosecute his cronies.

What do you think? Is the presidential pardoning power abused or too strong? Should it be limited in some way?

22 comments on “How Do Presidential Pardons Work?”