The Many Lawsuits of Donald Trump 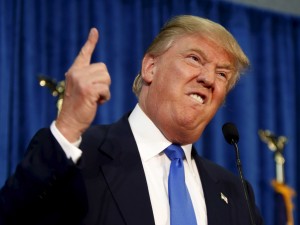 Donald Trump has money and real hair and lawyers. So he’s sued a few defendants … like a beauty pageant contestant, journalists, his ex-wife, and the country of Scotland. His lawsuits are HUGE and AMAZING. Here’s a rundown of the BEST OF THE BEST from The Donald.

In June of 2015, Donald Trump filed a $500 million lawsuit against Univision Communications after the company scrapped its planned telecast of the July 12 Miss USA beauty pageant as a result of Trump’s disparaging comments about Mexican immigrants.

In August of 2015, Donald Trump filed two lawsuits against two very popular chefs –Geoffrey Zakarian (a judge on the show “Chopped”) and José Andrés. The suit alleges that the chefs have illegally pulled out of agreements to build restaurants in the new Trump International Hotel under construction in Washington, DC. The chefs stated that they pulled out of their respective agreements after hearing Trump’s remarks about Mexican and Hispanic immigrants.

In January 2006, Trump filed a $5 billion lawsuit against Timothy O’Brien, author of Trump Nation, and his publisher. In his book, O’Brien reported that three people close to Trump had estimated his net worth at between $150 and $250 million. Trump claimed that he was worth between $4 billion and $6 billion. His lawsuit claimed that O’Brien’s low estimate had hurt his reputation and cost him specific business deals. Trump’s suit and subsequent appeal was dismissed in July 2009 and September 2011.

In 2013, Trump sued comedian Bill Maher who offered to give Trump $5 million if he could prove that his father was not an orangutan. The offer was a spoof of Trump’s offer to give $5 million to charity if President Obama would release his birth records and applications for colleges and passports. Trump sent Maher a copy of his birth certificate, but the comedian never paid up. Maher later said, on his show, “Donald Trump must learn two things–what a joke is, and what a contract is.” Trump withdrew his lawsuit against Maher later that same year.

In 2012, Sheena Monnin, a contestant in the Miss USA pageant, owned by Trump, claimed that the entire contest was rigged. The Miss Universe Organization — which Trump owns in partnership with NBC Universal — filed a suit, and won an arbitration award, against Monnin. He called her “a beautiful young woman who had sour grapes because she wasn’t a top-15 finalist.”

In the 1980s, when Trump was in the relatively early days of his professional ascent, he sued another businessman who dared to have the same last name as him. Julius and Edmond Trump were trying to buy a chain of drug stores, and their business was called “The Trump Group.” Donald Trump sued Julius and Edmond Trump in New York state court, alleging they were nothing but a pair of late-arriving immigrants trying to piggyback on the good name of the Trump family. The case was eventually thrown out.

In the early ’90s, he sued his ex-wife Ivana, accusing her of fraud and of breaking an agreement not to talk about their relationship.

In 1997, Trump sued the state of New Jersey to prevent Las Vegas casino magnate Steve Wynn from encroaching on his Atlantic City territory with the construction of a $330 million tunnel leading to Wynn’s very own resort. Trump claimed that if the state used casino funds to support the tunnel, it would be “taking money from widows and orphans,” the elderly, and people with disabilities.

In 1993, Trump, who owns three casinos in Atlantic City, sued the federal government, maintaining that allowing Indian tribes to open casinos discriminates against him. The suit maintained that the law gives an advantage to “a very limited class of citizens,” American Indians, at the expense of other citizens.

In 2006, Trump sued the town of Palm Beach, Florida for $10 million after he was cited for violating zoning codes by flying a too-big American flag over his club, Mar-a-Lago. The lawsuit claimed “a smaller flag and pole on Mar-a-Lago’s property would be lost given its massive size, look silly instead of make a statement, and most importantly would fail to appropriately express the magnitude of Donald J. Trump’s and the Club’s members’ patriotism,” according to the Associated Press.

In 2014, Trump sued Trump Entertainment Resorts, which he holds a 10 percent stake in, to remove his name from the Trump Taj Mahal and Trump Plaza casinos in Atlantic City, which he said did not live up to his standard of quality. 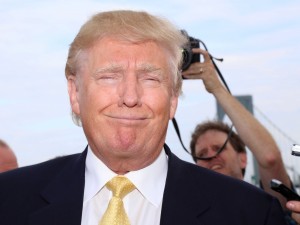 In 2011 MSNBC host Lawrence O’Donnell provoked Trump’s wrath when he accused him of being worth less than $1 billion. In a tweet, Trump insisted that his net worth was “substantially more than 7 billion dollars — very low debt, great assets.” O’Donnell responded that , “I know his big secret, his biggest secret, and he knows that I know it: Donald Trump cannot afford to sue me.”

In 2006, Trump threatened to sue Rosie O’Donnell, then a co-host on The View, after she said he was bankrupt and questioned his “moral compass.” Trump called O’Donnell “disgusting both inside and out,” but never ended up suing her.

Trump threatened to sue ABC in 2005, after he learned the network was planning to produce a two-hour biopic about him and his family. Trump said he would “definitely sue” if the film was “inaccurate.” But the biopic never happened.

In 1989, Trump threatened to sue Palm Beach County if it couldn’t figure out a way to muffle the loud noises coming from Palm Beach International Airport. 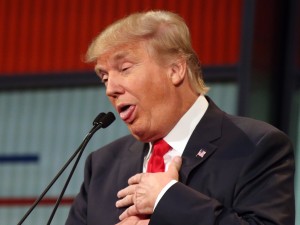 Never one to shrink from controversy, Donald Trump has attracted his fair share of lawsuits against him, as well.

Recently the band R.E.M filed a $2.5 million lawsuit against Donald Trump and Ted Cruz over the unauthorized use of its music.

Trump is still involved in two lawsuits brought by former students and one by the New York Attorney General alleging that the now-defunct Trump University was a scam. Trump University, launched in 2005, promised to teach students the mogul’s investing techniques to get rich on real estate. But the suit claims the teachers were not professors hand-picked by Trump as advertised, but rather independent contractors paid commissions for sales of the seminars and products. One complaints states that $35,000 was paid and very little to no educational or business value was to be gained from the university’s “Gold Elite” program. A trial court in New York state has already found Trump was personally liable for running an unlicensed school and must pay restitution to approximately 800 consumers nationwide who took courses after May 31, 2010.

In September of 2015, five people sued Donald Trump claiming they were attacked by his security team during a protest in New York. The plaintiffs are accusing the real estate magnate and his security chief of crimes and torts ranging from violent assault, theft of property and interfering with their right to political expression.

Whew! It ain’t easy being Donald Trump. Only 2 out of 5 lawsuits he was involved in, from over 100, had a measurable impact. This doesn’t include the various threats of lawsuit he has made. Here’s another piece of Trump legal trivia I bet you didn’t know: Donald Trump’s older sister, Maryanne Trump Barry, is a FEDERAL JUDGE on the Third Circuit Court of Appeal.

Are you voting for Trump? How many lawsuits is too many for a Presidential candidate? Do you think Trump is really a billionaire or just full of hot air? Tell us your thoughts.

7 comments on “The Many Lawsuits of Donald Trump”