Don’t Leave the Family Dog in your Car: Here’s What the Law Says! 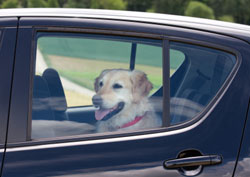 Recently, we here at The Reeves Law Group published a Facebook post on the continuing problem of owners leaving their dogs in cars unattended, especially on hot days. The post was pretty popular generating hundreds of likes and shares, and dozens of comments.

Commentary was relatively one-sided: most believed it’s not acceptable under any condition to leave your dog in the car when running errands. Even leaving the windows down a crack, parking in the shade, or leaving the car running with the AC on, didn’t seem to absolve owners from  a greater responsibility to man’s best friend.

Bottom line: If you can’t bring your dog in with you, then leave the pet at home. Tweet this

But what happens if you come across a dog kept in a car on a hot day? Can you break the window and attempt a rescue? What if you are the owner and you’re the one leaving your pet unattended, is there ever an excuse (legally) to do so? And if there isn’t an excuse, what can happen to you legally as the result of the action?

Based on your home state, the answers to these questions can vary widely. Let’s look at the issues more closely both here in California and in the context of the greater jurisdictional area of the United States.

In what states is it actually codified as illegal to leave your dog unattended in a car?

Currently, only 16 states (AZ, CA, IL, ME, MD, MN, NC, NV, NH, NJ, NY, ND, RI, SD, VT, and WV) have statutes that specifically prohibit leaving an animal in confined vehicles. Most of these statues are dissimilar but do require that the animal be either confined or left unattended in a parked (stationary) vehicle.

Next, for the person to have actually violated the law, the animal must be in clear danger. That means that conditions of either extreme cold or heat, lack of adequate ventilation, or failure to provide proper food or drink can all come into play for determining negligent grounds. Tweet this

In fact, some of the statues are so vague that for owners to be considered in violation the conditions in which the dog is subjected to need only be “likely” to result in physical injury or death.

Here in CA, the appropriate statue is California Penal Code 597.7 PC which was enacted in 2006. This law makes it illegal to leave an animal (or animals) in an unattended car if by doing so you endanger the health or well-being of the animal.

First-time violators in CA can receive a citation and a $100 fine (per animal). However, if the animal suffers “great bodily harm” (or death) that JUMPS to a misdemeanor, punishable by up to $500 and a maximum six-month county jail sentence – and that is regardless of number of offenses.

Unlike some jurisdictions, in CA length of time of the offense is irrelevant. Be it 2 minutes or 20 minutes it’s still just as illegal.

To read more about this statute and see a chart covering all 16 states referenced above click here.

Of the states that don’t actually codify this issue as illegal, what can be done to prosecute offending dog owners?

Just because there are 34 states that don’t have an actual statute addressing this issue doesn’t absolve offenders from liability. Most states and local jurisdictions have anti-cruelty laws that can and are used to prosecute pet owners who have caused their dogs to suffer and/or die.

A good example is the TX case of Lopez v. State. In this 1986 state case the defendant left his dog in a car on a hot and sunny day to attend a movie with his wife. Even though he did crack the windows and check on the dog during the movie, Lopez was arrested and convicted of animal cruelty for “transporting or confining his animal in a cruel manner.”

More recently, an OH police officer was convicted of animal cruelty in 2015 for accidentally killing his K-9 partner when he left him in his police cruiser on a hot summer day and he died of heatstroke. The officer left his partner in the car with the windows rolled-up and no air conditioning for more than four hours on a 69-degree day.

Is there ever a valid legal defense for leaving a dog in a car unattended?

As with any legal situation involving emotion and animals, sometimes innocent people are unjustifiably accused of animal abuse or neglect. Fortunately, there are several defenses that can be utilized, the most common being: you did not endanger the health or well-being of your animal.

In CA , leaving a pet unattended in a car is not automatically a crime. For you to be guilty of the statue you must clearly endanger the health or well-being of the animal.

Maybe you were in-between trips to get the dog water or food? Maybe you put the dog in the car and were just returning to put another kid or person in the car? Or, maybe the windows are down in the car and the weather is so mild that any reasonable person could see the animal is in no danger of distress or injury?

Even though we used the example of Jennifer Beals in Vancouver in our original Facebook post, it’s very likely that in her situation (it was a mild day, the windows were down, and she was returning very quickly to the vehicle) she would not be held as liable for animal cruelty at all in that jurisdiction.

Regardless, it’s still poor form to leave an animal in a car unattended, regardless of length of time, hence the public outcry when she hit the news last week.

If you come across a dog in a hot car, can you attempt a rescue yourself?

In most jurisdictions there do exist what are called “necessity defenses” (AZ for example) whereby if a reasonable person (or Good Samaritan) would agree that breaking the window was the best way to save the dog, then taking action would generally be justified. It’s always best though to check with your local authorities.

In CA, law enforcement officers (including animal control and humane officers) are legally permitted to do whatever is necessary to remove an animal from a vehicle that they observe in their opinion to be suffering distress. That standard however, does not usually extend to the normal person on the street.

For even more context on how to handle this situation, we recommend a review of the below infographic from The Daily Dog Blog which asks the further question “When Is It Too Hot For Your Dog?” Tweet this 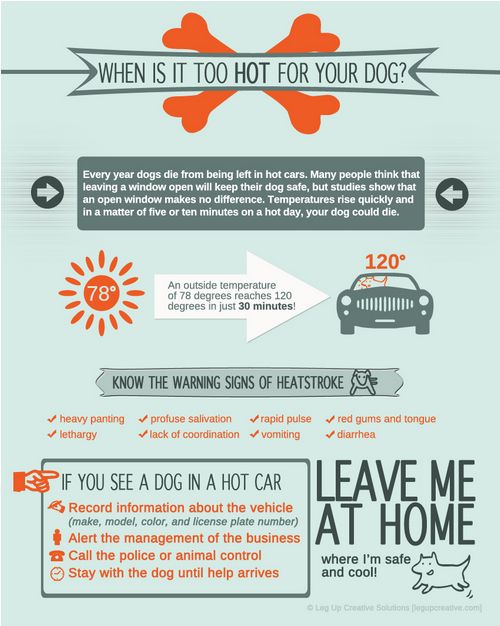 As the infographic above advises, if you see a dog in a hot car, do the following:

Unfortunately, you can see above that nowhere is it listed that you should “break the window to rescue the animal.” Doing so could leave you liable for damages from the owner.

But as was a popular response on our Facebook post, most people would gladly pay for a broken window if doing so would result in the rescue of man’s best friend. And we tend to agree!

One comment on “Don’t Leave the Family Dog in your Car: Here’s What the Law Says!”