Do Cop Killers Always Get the Death Penalty?

Back in December 2015, Donald Trump told a room of gathered law enforcement officials that all police murderers would receive the death penalty under a Trump administration. That may not be legally feasible since individual states set sentencing laws.

According to the FBI, an average of 64 law enforcement officers were killed each year from 1980–2014 in the line of duty. Recently, the killings of five police officers in Dallas and three police officers in Baton Rouge shocked the nation. The gunmen in those attacks were both killed on the scene. If the attackers had survived, though, would they definitely have received the death penalty?

Cop Killers Do Not Always Receive the Death Sentence

Contrary to popular belief, cop killers are not always sentenced to death, even in states that one would normally consider to be highly pro death penalty and tough on crime. For example, a cop killer in Arizona was sentenced to life in prison without possibility of parole. In Nevada, a gang member who robbed and killed a police officer in his home was sentenced to life without parole. In that case, prosecutors decided to accept the cop killer’s plea deal because there were concerns a jury might not agree on a death sentence.

Occasionally, cop killers on death row are spared due to a change in law. For example, in Connecticut where the death penalty was abolished in 2015 by the state’s Supreme Court, death sentences were overturned for all death row inmates, including cop killers.

Can Juvenile Cop Killers Ever Receive the Death Penalty?

No. In 2012 the U.S. Supreme Court ruled that mandatory life sentences without parole in homicide cases involving juvenile killers violated the U.S. Constitution’s ban on cruel and unusual punishment. The U.S. Supreme Court recently expanded its ban on mandatory sentences of life in prison without parole for inmates convicted of murders committed before age 18, saying even those imprisoned years ago should have an opportunity to argue for their release.

Is the Death Penalty Falling Out of Favor? 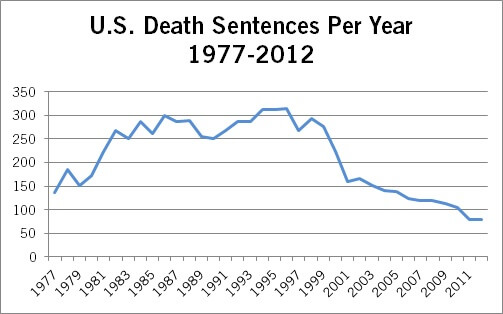 Since 1976, there have been 1,437 executions in the United States. 31 states currently permit execution as a criminal penalty, including California. But no one has been executed in California since 2006. As of January 1, 2016, California actually had the most death row inmates (743) of any state. Since 1973, more than 150 people were released from death row due to evidence of their innocence. In the last 20+ years, the numbers of death sentences have dropped dramatically from 295 in 1998 to just 49 in 2015.