Fact or Fiction: Border Agents Do Not Need Probable Cause to Search You At Any U.S. Border Crossing

Fact! The Fourth Amendment to the U.S. Constitution typically requires government searches to be “reasonable” meaning a warrant is required before the government can search property or persons. The border search exception allows searches and seizures at international borders and their functional equivalent without a warrant or probable cause.

Can Border Agents Conduct Body Cavity Searches Without Any Probable Cause?

Thankfully no! The U.S. Supreme Court has ruled that while body cavity searches at the border do not require a warrant, they do require “reasonable suspicion” that the traveler is carrying contraband in his/her body, and that especially “destructive” or “offensive” searches may not be allowed. The Supreme Court has not, however, actually explained what these terms mean.

In 2016 a U.S. citizen woman who was subjected to unwarranted body cavity searches after crossing a Texas-Mexico border in 2012 has been awarded nearly half a million dollars by U.S. Customs and Border Protection. The woman was first searched at the border checkpoint and later taken to a hospital in El Paso, where hospital staff performed the more intrusive searches. The woman was released after six hours and was not charged with a crime. She was randomly chosen for the initial search at the port, court documents state, and later charged more than $5,000 in hospital bills. 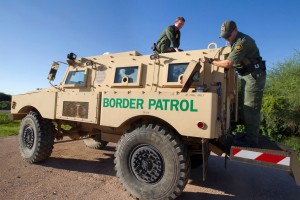 Which Federal Agents Are Authorized to Conduct Warrantless Searches?

The U.S. Customs and Border Protection (CBP) officers, U.S. Immigration and Customs Enforcement Special Agents (ICE), and U.S. Coast Guard officers (E4 grade and above) who are all customs officers (those tasked with enforcing Title 19 of the United States Code) with the U.S. Department of Homeland Security, are permitted to search travelers and their belongings at the American border without probable cause or a warrant.

Yes! Customs officers may generally stop and search the property of any traveler entering or exiting the United States at random, or even based largely on ethnic profiles. See United States v. Montoya de Hernandez, 473 U.S. 531, 538 (1985) (“travelers may be stopped [and searched] at . . . the border without individualized suspicion.”)

Can Border Agents Search Your Electronic Devices Like Phones and Computers?

The short answer is Yes. As of now, border agents in most of the country may search electronic devices at the border without any warrant or probable cause. The U.S. Supreme Court has previously approved of expansive computer searches in United States v. Arnold.

However, in 2013 the Ninth Circuit Court of Appeals for the first time placed a limit on the government’s ability to search an electronic device at the border. The en banc Court (meaning the case is heard before all Justices of the Court) held that laptops and other electronic storage devices, when presented for inspection when entering the United States at the border, may not be forensically examined without a reason for suspicion. United States v. Cotterman, 709 F.3d 952, 956–57 (9th Cir. 2013) (en banc).

In 2007, Howard Cotterman attempted to enter the United States from Mexico through a port of entry in Arizona. Border agents detained Cotterman for 8 hours while they searched, without a warrant, two laptops and a digital camera he was carrying. The agents let Cotterman enter the U.S. but held onto his electronic devices and took them 170 miles away to Tucson, where they continued their warrantless search for two days. Ultimately the agents found child pornography on the computers and Cotterman was arrested and indicted.

As a result of the Ninth Circuit’s ruling in Cotterman, there now exists a “reasonable suspicion” standard for electronic searches at the borders in the Western United States, including along the Mexico-U.S. border in California and Arizona. However, “reasonable suspicion” remains open to differing interpretations.

Can Border Agents Keep Copies of Your Electronic Data?

CBP tells its agents that “with or without individualized suspicion,” they can inspect electronic devices and data encountered at the border. The agency can keep your computer or copies of your data for a “brief, reasonable” amount of time to be searched on- or off-site. Ordinarily, this isn’t more than five days. See U.S. Customs and Border Protection, Dir. 3340-049, Border Searches of Electronic Devices Containing Information at 5.1.2 (Aug. 20, 2009) (PDF).

What do you think? Should border agents be allowed to conduct searches of travelers’ electronic devices under any circumstances?