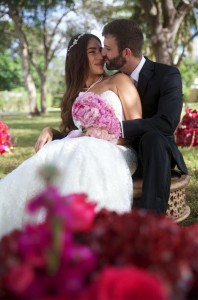 We here at The Reeves Law Group are very pleased to announce the winner of our 2015 college scholarship award for $2500. The winner is third-year law student, and new bride, Alamea Deedee Bitran of Miami, FL. Alamea attends Florida International University School of Law and was informed of the award, during her wedding!

Alamea is currently in the top 5% of her law school class and is on track to graduate in the Fall of 2016. Alamea won this year’s scholarship, beating out several other strong applications, on the basis of her very strong essay. An essay which detailed her background as an ASL volunteer in audiology, experience helping the hearing-impaired navigate the Americans with Disability Act, and her future desire to work as a public interest law advocate.

Alamea took a less than conventional route to law school and was first a graduate student in the field of Audiology at the University of Maryland. While there, Alamea used her skill in American Sign Language (ASL) to assist clinically with many of the local hearing impaired population.

However, it was during a talk by a visiting legal scholar on the topic of the Americans with Disability Act (ADA) that Alamea got the legal bug. She applied to Florida International in Miami, FL., and was accepted soon after to law school.

“Alamea’s application was very interesting to read and besides her strong academic profile, it was her clear desire to enter the field of Public Interest Law and future plans to assist the hearing-impaired that made her application truly stand-out,” said firm founder Robert Reeves. “It was just icing on the cake that we happened to inform Alamea that she had won the award during her recent wedding. I’m sure that made for interesting dinner conversation during the reception.”

As mentioned above, Alamea’s future career ambitions involve assisting the disabled to better navigate the sometimes confusing 1990 landmark Americans with Disabilities Act which recently celebrated its 25th anniversary. According to the most recent US Census in 2010, there exist 56.7 million Americans who live with a disability. We are confident that with a new advocate like Alamea in their corner, that the future for those struggling with disabilities in FL looks much brighter.

Full details on Alamea’s very deserving selection can be found in the official press release. And for information on the scholarship program for 2016 click here for full details.