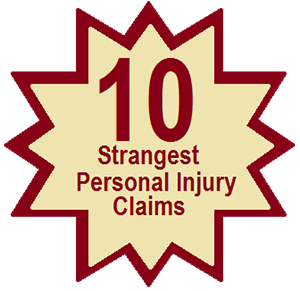 At The Reeves Law Group, we advocate, through the justice system, for victims who have suffered as a result of the negligence of another individual or organization. The clients who we work with have genuine grievances, and deserve compensation from those whose negligence resulted in pain, suffering, and substantial financial loss.
However, if there is one thing that we know to be true it’s that, throughout the course of time, there have been individuals who have taken advantage of the legal system in order to make a quick pay day.
Below are 10 of the strangest personal injury claims that we have ever seen. You will read tales of individuals suing for things like misleading T.V. commercials and bad haircuts. We found them all to be pretty amusing and we think you will as well.
If you do, please feel free to share them with your friends and family using the quick sharing buttons above. Enjoy!

In Overton v. Anheuser-Busch Co., Richard Overton sued Anheuser-Busch for $10,000 after drinking a six-pack of Bud Light failed to transport him to a balmy beach teeming with throngs of bikini-clad women. Overton cited television commercials “featuring Bud Light as the source of fantasies coming to life” in arguing that the defendant’s “misleading advertisements” had caused him physical and emotional distress, as well as other losses. Unsurprisingly, the case was dismissed.

A viewer of the television show Fear Factor sued NBC for $2.5 million, claiming that a stunt during which contestants were forced to eat rats mixed in a blender caused him to vomit and suffer emotional distress. The plaintiff said he wanted to send a message to NBC and other TV networks about reality shows going “too far.”

In Krasnecky v. Meffen, a Massachusetts couple sought compensation for emotional distress and loss of companionship after seven of their sheep were killed by a neighbor’s dogs. The plaintiffs asked for $140,000 in damages, but the court was willing to offer only the economic value of the sheep to them. When the couple did not produce evidence of the value of the sheep, the judge awarded the plaintiffs $1.

A woman filed a lawsuit against television evangelist Ernest Angley and his ministry after she was injured while bringing her wheelchair-bound mother to the stage of a church for a “personal healing” by the minister. She sought more than $25,000 in damages, claiming that her retina was detached after ushers “roughed her up” during the ceremony.

In Pearson v. Chung, an administrative law judge sued the owners of Custom Cleaners in Washington, D.C. for $67 million after the dry cleaning company misplaced a pair of his trousers. In the plaintiff’s opinion, Custom Cleaners had failed to live up to a “satisfaction guaranteed” sign that was displayed in their window.

An Oregon man who was frequently mistaken for basketball legend Michael Jordan brought a lawsuit against Jordan and Nike, seeking $832 million in damages. Allen Heckard claimed that Jordan had caused him emotional pain and suffering as well as “permanent injury” by essentially defaming him. The suit was dismissed.

A woman sued a Florida county after she fell and injured herself while trying to shield her son from an attack by a goose in a public park. She asked for $15,000 to account for medical bills, mental anguish, and physical pain.

In Rohwer v. Federal Cartridge Co., a man who was mauled by a lion during an African big game hunting safari sued an ammunition manufacturer for his serious injuries. The plaintiff had fired a bullet made by Federal Cartridge Co. at a charging lion. When the bullet, which penetrated the lion’s shoulder, failed to stop the animal, it attacked and mauled the plaintiff. The case was dismissed by a federal court.

A woman sued a hair salon for emotional distress, depression, counseling, and lost income after a straightening treatment caused her hair to fall out. At trial, the woman testified that the balding caused her to become depressed and reclusive. A jury awarded her $6,000 after finding her hairstylist was negligent.

A woman filed a $90 million malpractice lawsuit against a hospital and the manufacturer of a recalled medical instrument after she learned that she may have been exposed to bacteria during a medical examination. She claimed that as a result of the examination, she suffered “unnecessary pain” and “fear of not knowing” whether she had been exposed to pseudomonas bacteria. The woman ultimately dropped the lawsuit.