What TV Lawyer Personality are You? (Plus the Best Saul Goodman Quotes!)

There are many different TV lawyer personalities shown, some depict lawyers pretty favorably, others, not so much.  Shows depicting the lives of lawyers, their cases, and the motives of the criminals they defend or prosecute, have entertained us for years. Personal injury attorneys don’t usually end up on TV, but defense attorneys do and all their associted antics more than make up for it!

The question is what TV Lawyer personality are you?

We thought we would have a little fun over here and start showcasing the lives and personalities of famous, or infamous, TV lawyers. With the instant success of the Breaking Bad spin off “Better Call Saul” we decided to start off with a bang and introduce the current reigning TV lawyer personality: Saul Goodman. 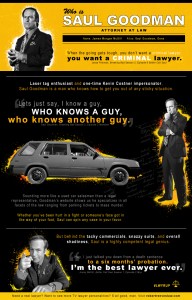 Who is Saul Goodman you ask?

Saul made his way into the Breaking Bad world in season two when Jesse pointed out that they didn’t need a “Criminal Lawyer” but rather a “criminal lawyer.” Saul Goodman lived up to their expectations and went to extreme lengths to keep Badger out of prison. Tactics on the short list: Bribery, kidnapping, death threats, just to name a few.

As for his education, it’s a mystery.  The diploma hanging in his office was for a Masters of Arts degree in Political Science at the University of American Samoa (a non-existent college using his fake name).

Saul is a highly skilled “lawyer” with an insane talent for finding legal loopholes.

We have put together a list of what we think are the Top Ten Saul Goodman Quotes of all time.

“Faith and begorrah! A fellow potato eater! My real name’s McGill. The Jew thing I just do for the homeboys. They all want a pipe-hitting member of the tribe, so to speak…”

2.“Conscience gets expensive, doesn’t it?”

“As to your dead guy, occupational hazard. Drug dealer getting shot? I’m gonna go out on a limb here and say it’s been known to happen.”

“Did you not plan for this contingency? I mean, the Starship Enterprise had a self-destruct button. I’m just saying.” 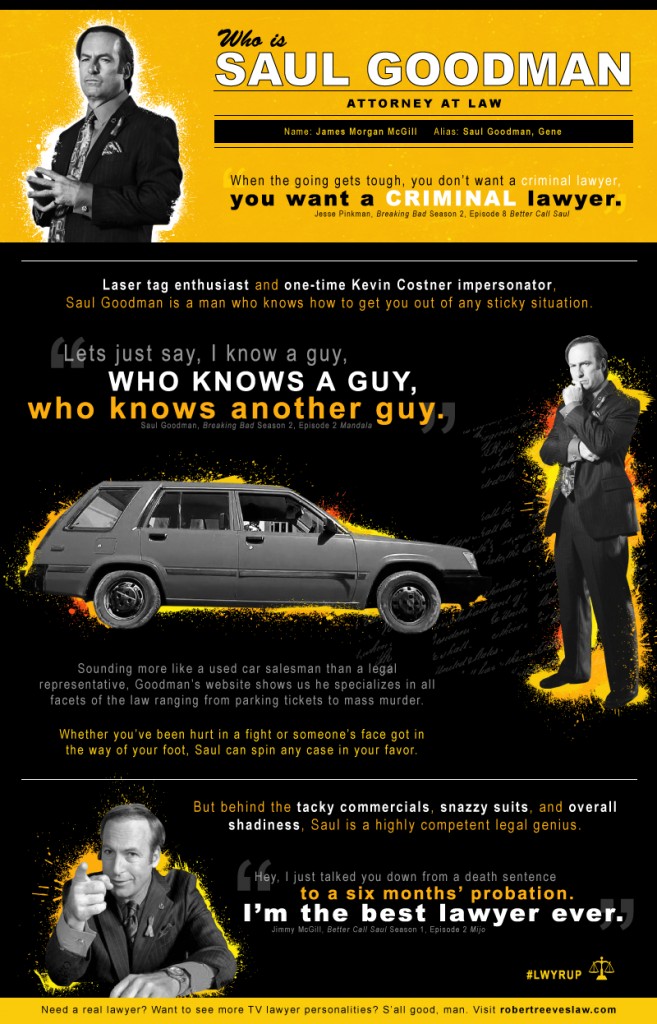 Embed This Image On Your Site (copy code below):

“Walter never told me how lucky he was. Clearly his taste in women is the same as his taste in lawyers: only the very best… with just a right amount of dirty!”

6. “If you’re committed enough, you can make any story work. I once told a woman I was Kevin Costner, and it worked because I believed it.”

“He said he was gonna break my legs, and don’t tell me he didn’t mean it because he gave me the dead mackerel eyes.”

“Some people are immune to good advice.”

“Say, just for the sake of argument, that the kid’s not in the mood for a nuanced discussion of the virtues of child poisoning.”

7 comments on “What TV Lawyer Personality are You? (Plus the Best Saul Goodman Quotes!)”