29 Strange, Bizarre, and 100% True Facts About the Supreme Court

“Presidents come and go, but the Supreme Court goes on forever.”

Those words from former President William Howard Taft highlight the importance of this judicial body, also known as “the highest court in the land.”

Throughout its nearly 230-year history, a number of interesting personalities and cases have made it what it is today. To shine a light on the court’s colorful history, let’s have a look at these 29 Strange, Bizarre, and 100% True Facts About the Supreme Court. 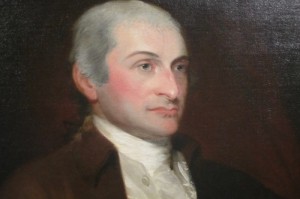 George Washington was not only the first U.S. President, he was also the President with the most Supreme Court picks at 10. He is followed by Franklin Delano Roosevelt, who appointed nine.

3. U.S. Supreme Court Justice John Rutledge — the second to ever hold the position — was also the only person ever removed against his will. His departure was due to a controversial speech he had given that denounced the President Washington-supported Jay Treaty with Great Britain. He later tried committing suicide by jumping off a wharf, but was fished out by two slaves before he could drown. 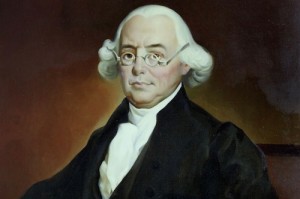 Associate Justice James Wilson was the first member of the Supreme Court to die in office. Wilson contracted malaria, then had a stroke. He was 55. Wilson was awful with money. He spent time in a debtor’s prison, was bailed out by his son, and actually fled from New Jersey to North Carolina to escape creditors.

6. Being a Supreme Court Justice has been called a “lifetime appointment,” but Justices do not generally treat it as one. Case-in-point, of the 112 confirmed, less than half (50) have died in office. The majority have resigned or retired. 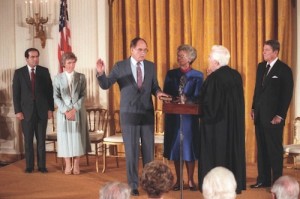 Prior to Justice Antonin Scalia’s death in 2016, Chief Justice William Rehnquist was the last to die in office, 11 years prior. Both men were in their 80th year of life. Both died one month shy of their next birthday. Both were nominated by Republican Presidents, and both were from Virginia. Spooky, huh?

8. President William Howard Taft is the only President to have also served on the Supreme Court. He left the White House in 1913 after one term as President and reemerged in 1921 as Chief Justice — a position he held until 1930.

9. In the court’s history, 106 of the 112 Justices have been white men. Only six are minorities with four women and two African-Americans. One of the women — Justice Sonia Sotomayor — is also Latina. 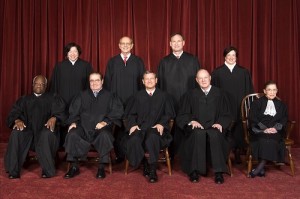 Nine has not always been the magic number for Justices. While the Court has settled there since 1869, it reached an all-time high of 10 in 1863 — not exactly conducive to majority opinions — while the inaugural Court only hosted four.

11. The richest Supreme Court Justice is Ruth Bader Ginsburg. She reportedly has a net worth as high as $18.1 million while poor Justice Anthony Kennedy is only worth around $700,000, according to Above the Law.

12. The first Supreme Court did not issue a single ruling, according to Fergus Bordewich, a historian and author of the book The First Congress: How James Madison, George Washington, and a Group of Extraordinary Men Invented the Government. Only five of six posts had been filled. Only four Justices convened. Nothing happened. 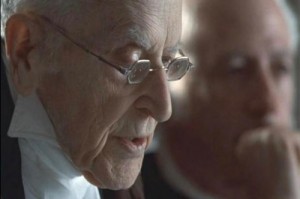 Justice Joseph Story was the youngest to ever take the post at just 32 years old. He served 33 years, from 1812 to 1845. He was depicted in the Steven Spielberg film Amistad and played by none other than a fellow brother of the robe, retired Justice Harry Blackmun.

14. Two Supreme Court Justices actually made it onto currency. John Marshall’s image once presided over the $500 bill, and Salmon P. Chase was the mug was printed on the $10,000 bill. Wouldn’t you have liked to make change on that bad boy?

15. Justices Scalia and Ginsburg might have seemed like mortal enemies if you looked strictly at their politics, but the pair were actually great friends. United by a love of opera, their families would vacation together.

Upon Scalia’s death, Ginsburg penned a touching remembrance, writing, “We are different, we are one — different in our interpretation of written texts, one in our reverence for the Constitution and the institution we serve. From our years together at the D.C. Circuit, we were best buddies … It was my great good fortune to have known him as working colleague and treasured friend.”

16. Image Source: Architect of the Capitol 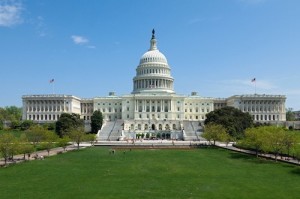 For the first 146 years of its existence, the Supreme Court did not have its own building. Justices reportedly met in different rooms of the Capitol building and also frequented private homes and bars to discuss their cases.

17. On the topic of cases, the court is not particularly productive when it comes to its case-to-opinion ratio. While it does manage to issue rulings on between 80 and 90 per year, it receives anywhere from 7,000-8,000 new cases each term.

18. President Ronald Reagan was the last POTUS to have a Supreme Court pick outright rejected. (President Obama’s choice of Merrick Garland never got a hearing to be rejected.) In Reagan’s case, the choice was Robert Bork, but he was considered too extreme for the Democratic Senate.

The late Sen. Ted Kennedy summed up fears of Bork on the bench like this:

“Robert Bork’s America is a land in which women would be forced into back-alley abortions, blacks would sit at segregated lunch counters, rogue police could break down citizens’ doors in midnight raids, schoolchildren could not be taught about evolution, writers and artists could be censored at the whim of the Government, and the doors of the Federal courts would be shut on the fingers of millions of citizens for whom the judiciary is — and is often the only — protector of the individual rights that are the heart of our democracy.”

Reagan’s second choice was Douglas Ginsburg, who withdrew his name after it was revealed he’d used marijuana in the 1960s. Reagan ended up settling for current Justice Anthony Kennedy. 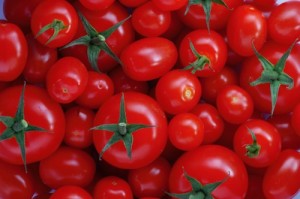 Ever gotten into an argument over whether tomatoes were fruits or veggies? So did the Supreme Court. The highest court in the land ultimately decided vegetable. The case was Nix vs. Hedden, decided in 1893.

John Nix was a big-time produce seller in NYC. The Tariff Act of March 3, 1883 determined taxes had to be paid on imported veggies, but not fruits.

Tomatoes being seed-bearing, many considered them to be fruits but ultimately Justice Horace Gray would argue, in a unanimous decision, that tomatoes weren’t fruits because they were typically eaten with the main course of a meal instead of as a dessert.

20. Some of you may think — horrifying as it may sound — the government is the only entity able to utilize eminent domain to its advantage. Not true.

The Supreme Court decided in the 2005 case of Kelo vs. City of New London that it was also usable when it came to the transference of property from one private owner to another.

Translation: you can be forced to sell your land to another at a predetermined price beyond your control even if you don’t want to, provided the sale is for the public good — except that’s not true if you follow the specific case all the way through to its conclusion.

The land owners in question were forced to sell to make way for the promise of economic development from the pharmaceutical company Pfizer. Pfizer never actually delivered on that promise after the sale, according to the Weekly Standard.

21. Beloved President Franklin Delano Roosevelt signed one of the least popular Executive Orders of all time (historically) interning the Japanese into camps during World War II, regardless of citizenship.

In Korematsu vs. U.S., the Supreme Court affirmed the constitutionality of the order. “Pressing public necessity may sometimes justify the existence of such restrictions; racial antagonism never can,” wrote Justice Hugo Black. 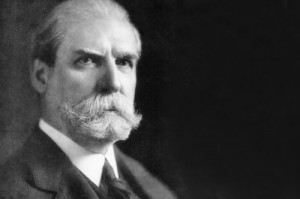 Associate Justice Charles Evan Hughes resigned his post to run for President of the United States in the 1916 general election. He lost by 23 electoral votes and less than 600,000 votes to Woodrow Wilson. He would later rejoin the court as Chief Justice in 1930.

23. The first ever Chief Justice and current Chief Justice are both named John — John Jay (No. 1) and John Roberts (No. 17). In fact, in the court’s entire 228-year history, there have been four Johns with John Rutledge and John Marshall rounding it out. 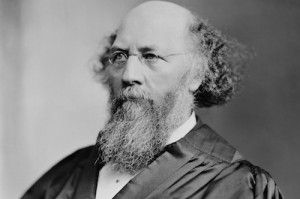 Justice Stephen Johnson Field was the only Justice subject to an assassination attempt (that we know of), but it was not while he was serving on the bench. Field had ruled against former California Supreme Court Chief Justice David Terry in a divorce case and sent him to jail for contempt of court. Terry vowed revenge, attempting to shoot Field but instead being gunned down by a U.S. Marshal.

26. Justice James Clark McReynolds is today viewed as one of the most bigoted Justices to ever sit. Spectator has an excellent analysis of his bigotry with “highlights” including referring to an all-black university as a “n***er university” while having his hair cut by an African-American barber and making frequent anti-Semitic comments. As you might imagine, he was not particularly well-liked. When he died, not a single colleague attended his funeral.

27. Justice Hugo Black holds the distinction of being one of the longest serving Justices with a 34-year tenure. He was also the only known member of the KKK, though he later said he regretted it. 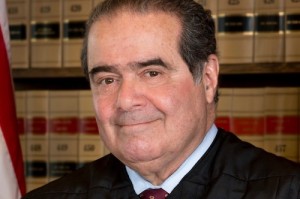 The term “fake news” has become popular following the election of President Donald Trump, and, yes, one Justice has been caught up in the realm of conspiracies that go along with it. There are a surprising though unsubstantiated number of people, who actually believe Justice Antonin Scalia was murdered.

The theory is a pretty flimsy one — okay, extremely flimsy — with “evidence” suggesting it is revealed through codewords used in the emails of Hillary Clinton confidante John Podesta. The theory has been perpetuated by conservative sites like The Gateway Pundit.

Not helping squash the concerns was the chaotic aftermath of Scalia’s death. He was pronounced dead of natural causes without an autopsy and without Presidio County Judge Cinderela Guevara actually seeing the body, according to the Washington Post. All permitted under law, but also fuel to the fire of tin foil hat wearers everywhere.

So there you have it, readers. Any surprises here? Which facts stood out the most, and which ones did we leave off? Sound off in the comments section below.

6 comments on “29 Strange, Bizarre, and 100% True Facts About the Supreme Court”