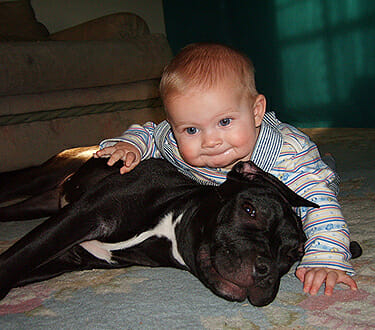 Let’s set up a test. Close your eyes and imagine that you are walking along your favorite hiking trail. You look up to see the horrifying site of a  dog attacking a person.

What kind of dog did you picture?

If you’re like most people, you probably pictured a Pit Bull, and with good reason. It is likely that every depiction of the breed that you have ever been exposed to is a negative one. These depictions might include Michael Vick’s dog fighting conviction or just another story one of the dozens of stories of a Pit Bull attacking a person. Based on these stories, our perception of the Pit Bull is that it is an intrinsically aggressive and violent breed.

This could not be further from the truth.

The fact remains, however, that due to this perception, State legislatures throughout the county have produced breed-specific laws. The facts about the Pit Bull breed suggest that these laws are nothing short of an egregious waste of resources. So let’s take a minute to look at the myths about America’s most feared dog breed, and the facts which suggest that our perceptions simply aren’t reality.

Myth 1: Pit Bulls are Among the Most Aggressive Breeds

False. Really false. In fact, according to the American Temperament Test Society, Inc. Pit Bulls rank second, only to Labrador Retrievers, in terms of tolerance: 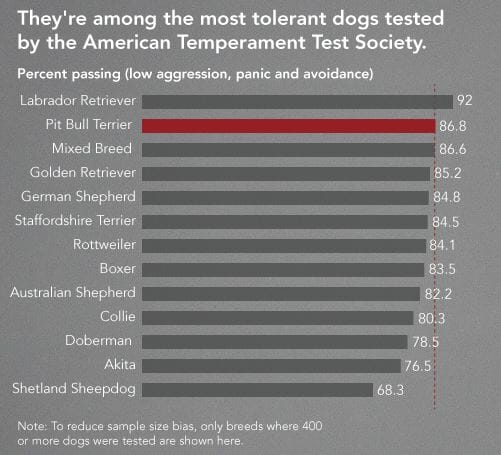 Myth 2: Dogs in the “Bully Breeds” are mean (bullies)

There are a variety of breeds which are commonly refereed to as “bully breed” dogs. These include pit bulls, bulldogs, mastiffs, Staffordshire bull terriers, American Staffordshire terriers, Boxers and Bull terriers. However, the semantics are misleading.

The “bully breed” title does not refer to their temperament. It refers to fact that they descendants of the original English baiting dogs. These dogs were bred and trained to grip and hold bulls, bears, and other large animals. However, when bull-baiting was banned in England in 1835, owners of these “bully breed” dogs resorted to putting on fights between their dogs.

No organization has ever been able to provide evidence that laws pertaining to specific dog breeds make communities any safer. However, there are plenty of examples of how breed-specific legislation can actually make things worse. For example, in many communities where ownership of Pit Bulls or other breeds is highly regulated, owners will fail to attain proper licensing, micro-chipping and vet care, which has a negative overall impact on the community.

What does this all mean? It means that the real issue with Pit Bulls is not their intrinsic personality traits, but rather their treatment by humans: 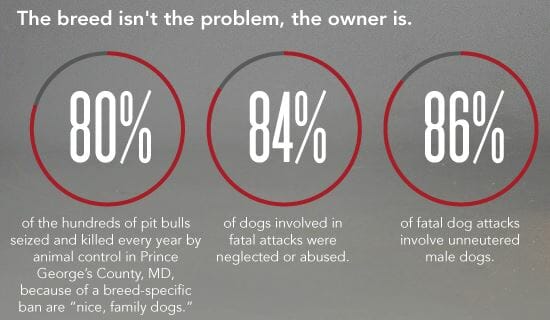 As injury attorneys, we have represented dozens of clients who were injured due to a dog attack. Often, individuals are hesitant to bring law suits against negligent dog owners because they think the dog will be harmed. In many cases, this is false. However, it is critical that cruel or irresponsible dog owners are held accountable for their negligence. By removing these people from the dog owner mix, we can begin to ensure that all breeds receive fair treatment based on the facts, not the myths.

Images courtesy of  Alissa Scheller of the Huffington Post and http://stubbydog.org