31 Strange But True Laws Still On The Books

All across the Internet, you will be able to find lists and lists of strange laws that either once existed or still exist depending on who’s doing the reporting. But what we found when looking at these examples, is that many either never existed or cannot be proven to have existed without searching through old, dusty print archives and records offices around the world.

“Such is the Internet. People hear something without substantiation, it lodges in their brains, and gets passed along as fact.”

Thankfully, there are authorities on the matter with legitimate legal training — people who can say that they’ve been there and seen the records for themselves and can confirm which bizarre laws existed and which legal oddities did not.

Two we turned to for 31 Strange But True Laws That Are Still On The Books! include communications law professor and LegalZoom contributor Stephanie Morrow and NYC attorney Nathan Belofsky, whose The Book of Strange and Curious Legal Oddities: Pizza Police, Illicit Fishbowls, and Other Anomalies of the Law That Make Us All Unsuspecting Criminals, is pretty much the Bible on the subject.

Included below, as the title says, are strange but true laws that are still on the books. Some hail from municipalities, some are state, some federal. But all are funny! Hold on to your hats.

1. No Margarine In Wisconsin!

Well, that’s at least how many websites will report it when talking about strange laws. The reality is that you can get margarine within the state of Wisconsin, but it comes with a series of strings attached. For instance, there are stipulations regarding the size of the container (no more than 1 pound) and the size of font on the packaging (must plainly say “margarine” and be at least as large as any other type or lettering on the label in a color of print which clearly contrasts with its background). You’ll find it on the books as Wisconsin State Statute 97.18. 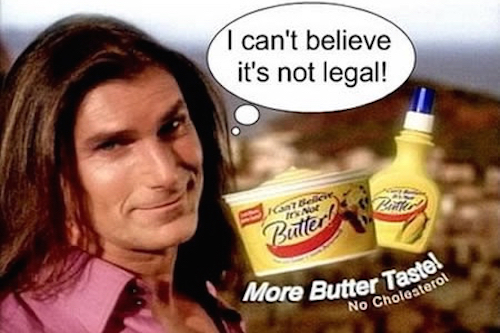 Children’s lemonade stands are part of a longstanding rite of childhood. Parents use them to teach their kids lessons on the value of working for a dollar through this method. But for a growing number of municipalities, they are against the law. Take this story from Coralville, Iowa, in which 4-year-old Abigail Krutsinger had her stand shut down by police 30 minutes after she opened it. Forbes has several other similar cases here if you think you can keep your blood pressure under control.

Alabama’s “fake mustache law,” wherein it’s said to be illegal to make a person in church laugh by wearing a fake mustache on Sunday, is a prime example of “Blue Laws.” (Never mind the fact that there is no mention of mustaches or church in the actual statute.) The “spirit” of the law is there, and it says that out of religious respect — mostly to Christians — certain activities, like selling alcohol, should be prohibited on Sundays.

Stephanie Morrow shared one from Salem, West Virginia, where it’s against the law to eat candy less than an hour and a half before church service. Another, in Winona Lake, Wisconsin, prohibits the eating of ice cream at a counter on Sunday. And in a “handful of states,” Morrow claims, “Marbles, Dominoes, and yo-yos” are banned on Sunday.

4. Breaking The Speed Limit … By Going Too Slow.

You can’t get a driver’s license without knowing that it’s unacceptable to go faster than the posted speed limit. While police may allow five to 10 miles over, anything beyond that will probably get you a warning or a ticket. That said, most motorists — even those who’ve been driving for a very long time — seem unaware that you can also break the speed limit by going too slow. In comments to CNN, Pete Kim of the California Highway Patrol admitted that it wasn’t a common thing, but it was possible to get a ticket if “you’re blocking traffic or creating a road hazard on the freeway.” (So a bit more pedal, slow-pokes!)

5. Bingo Sessions Must Not Last Longer Than Five Hours

According to the North Carolina Department of Public Safety’s Rule 14-309.5, the number of bingo sessions “conducted or sponsored by an exempt organization shall be limited to two sessions per week and such sessions must not exceed a period of five hours each per session.” 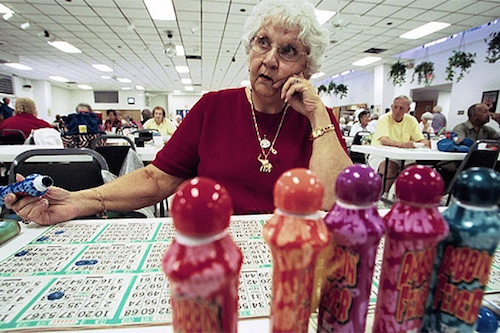 While our neighbors to the north do not forbid the use of pennies, Belofsky notes that they do have limitations for accepted use. That means if Indiana citizen James Sanders had tried to pay his $702 fine with more than 70,000 pennies — as noted in this piece from JC Online — he would have been flatly refused. Canada will allow a person to pay with no more than 25 pennies. If more is owed, you’ll have to switch to something bigger.

Federal law dictates that anyone who “issues or publishes a fake weather report and claims it’s from the Weather Bureau is subject to imprisonment for not more than ninety days.” Simply being bad at your meteorology job doesn’t count as “fake,” though. (18 U.S.C. Section 2074).

One obviously antiquated New Orleans law — especially if you’ve ever been there to see just how many people are making a living at it — forbids the “business of fortune-telling, astrology, or palmistry to settle lovers’ quarrels … locate buried or hidden treasures … remove evil influences … reveal secrets … or to bring together the bitterest enemies converting them into staunchest friends.” However, “nothing herein contained shall apply to any branch of medical science.” (Probably not covered by your ACA policy, New Orleans Municipal Code Section 54-312). 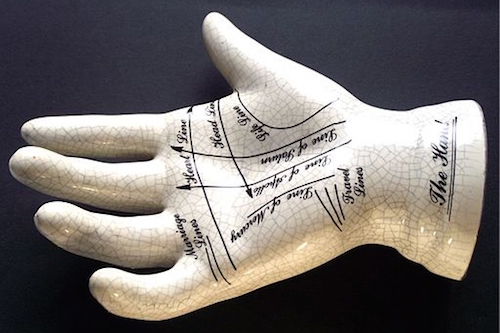 Two and a half centuries is a long time to be making laws. It’s only natural that in our nation’s history, some of the crazier ones would slip through the cracks and remain on the books in the 21st Century. In most cases, it’s entirely possible that lawmakers aren’t even aware that these are the laws they should still be enforcing. Because several of these don’t need a lot of fleshing out, we’ve done a quick roundup with hat tips to Morrow and Belofsky. Not all of these will be outdated, but the vast majority are. For the few scattered in that take their cues from the 21st Century — you’d have to ask the lawmakers.

9. In Pennsylvania, you actually have to dismantle your car and hide it if you’re sharing the road with a team of skittish horses. (Morrow)

10. In Missouri, you cannot, under any circumstances, drive with an uncaged bear in your car. (Morrow) 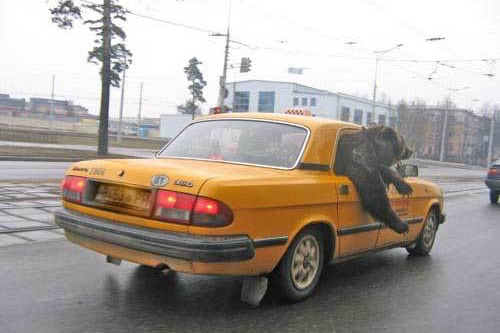 11. Florida’s elephant riders get no special treatment. If planning on parking their elephants at a paid meter, they must pop in some change. (Morrow)

13. Oklahoma warns that you can expect to pay a fine if you make ugly faces at someone’s dog. (Morrow)

14. Illinois forbids you from giving your pup a lighted cigar no matter how much he wants one. (Morrow) 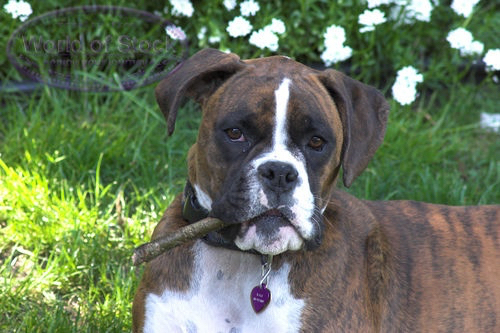 15. In Cleveland, Ohio, women are strictly forbidden from wearing patent leather shoes, particularly if they are wearing a skirt because it could unfairly tempt a man. It’s known as the city’s “peep show” ordinance. (Morrow)

16. Florida is also tough on the unmarried woman, who plans on doing her parachuting on Sundays. Not a problem if you’re in the company of your husband, though. (Morrow)

17. Ladies, plan on chopping off all your hair for the summertime? Michigan says no unless you first get your husband’s permission. (Morrow)

18. Memphis, Tennessee, doesn’t have a problem with women driving, but they must be proceeded by a man waving a red flag. (Morrow) 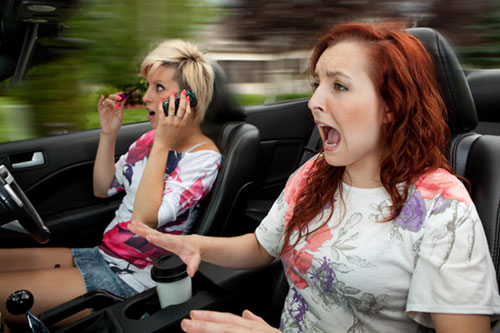 20. Also in New Hampshire, you cannot sell a lightning rod without a license. (Belofsky) 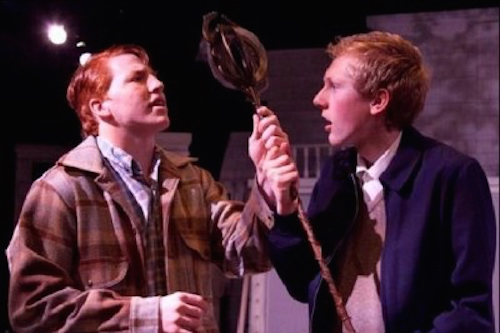 22. Also in Grand Forks, you cannot throw candy from a float during a parade (City Code Section 9-0211). (Belofsky)

23. Alabama frowns on taking a long time in the voting booth. If you take longer than four minutes, you can be asked if you need assistance. If not, and there is a high volume of voters waiting, you are given one more minute to vote and then asked to leave (Code of Alabama, Section 17-9-13(b) (2006)). (Belofsky)

25. Rhode Island’s “Mayhem” laws will slap you with one to 20 years in prison if you decide to cut or bite off the limb or member of another human being. It does have to be intentional, though (Section 11-29-1). (Belofsky) 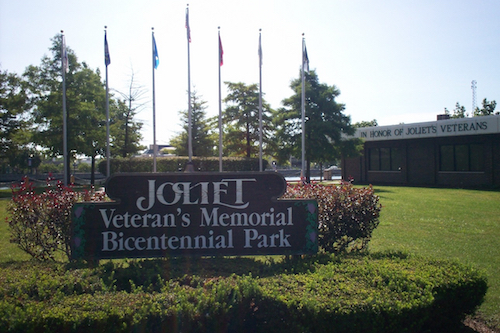 27. In Massachusetts, using a boom box without earphones in public can get you tossed in the clink for as much as 30 days (Crimes Against the Person, Section 265-42). (Belofsky)

29. In West Virginia, it is a “crime against the government” to display or possess a red or black flag (West Virginia Code, Section 61-1.6). (Belofsky)

We here at The Reeves Law Group hope you’ve enjoyed this odyssey through some of the more peculiar U.S. laws that are still on the books. Are there any in your state that we’ve left off? Share them in the comments section!