Does Trump Have Case Against Ghostwriter Who Called Him “Sociopath?” 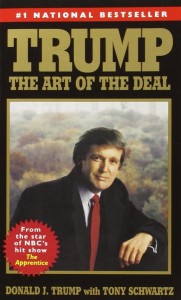 Tony Schwartz was the ghostwriter for Donald Trump’s 1987 memoir, “The Art of the Deal.” The best-selling memoir sold around a million copies, earning Trump and Schwartz handsome royalties. To write the book, Schwartz spent eighteen months with Trump—in his office listening to Trump’s phone calls, attending meetings, and spending weekends with him.

On July 18th, the New Yorker magazine published a bombshell interview with Schwartz. In that interview, Schwartz said:

If Schwartz were writing “The Art of the Deal” today, he would call it, “The Sociopath.”

It was impossible to keep Trump focused on any topic, other than his own self-aggrandizement, for more than a few minutes…. Schwartz believes that Trump’s short attention span has left him with “a stunning level of superficial knowledge and plain ignorance.”

“I seriously doubt that Trump has ever read a book straight through in his adult life.” During the eighteen months that he observed Trump, Schwartz said, he never saw a book on Trump’s desk, or elsewhere in his office, or in his apartment.

Trump seemed driven entirely by a need for public attention.

Lying is second nature to him,” Schwartz said. “He lied strategically. He had a complete lack of conscience about it.”

Schwartz later learned that while “The Art of the Deal” was being written Trump began an affair with Marla Maples, who became his second wife.

Trump spent very little time with his family and had no close friends.

“He’d like people when they were helpful, and turn on them when they weren’t. It wasn’t personal. He’s a transactional man—it was all about what you could do for him.”

“The notion that he’s a self-made man is a joke. But I guess they couldn’t call the book ‘The Art of My Father’s Deals.’ ”

Schwartz also appeared on “Good Morning America” to voice his concerns about Trump’s “impulsive and self-centered” character. On “Good Morning America,” Schwartz said that “The Art of the Deal” very likely contained “falsehoods” owing to the fact that Trump, in his opinion, has a strong propensity to exaggerate and lie. When Trump asked Schwartz to co-author a sequel to “The Art of the Deal,” Schwartz rejected the offer.

Jason D. Greenblatt, the general counsel and vice-president of the Trump Organization, issued a threatening cease-and-desist letter to Schwartz. Greenblatt accuses Schwartz of making “defamatory statements” about Trump and orders Schwartz to issue “a written statement retracting your defamatory statements,” and to offer written assurances that he will not “generate or disseminate” any further “baseless accusations” about Trump. Read the full letter from Trump’s attorney here. Greenblatt’s letter does not actually refute Schwartz’s claim that he, not Trump, wrote the book. Howard Kaminsky, the former Random House head, has said, “Trump didn’t write a postcard for us!”

Schwartz said that he would continue to speak out against Trump, and that he would make no retractions or apologies. Read the full response from Schwartz’s lawyer describing Trump’s cease-and-desist letter as “nothing more than a transparent attempt to stifle legitimate criticism.” Schwartz said, “I’m much more worried about his becoming president than I am about anything he might try to do to me.”

CAN TRUMP WIN A DEFAMATION SUIT AGAINST HIS GHOSTWRITER?

Trump has already indicated that he wants to weaken the First Amendment and “open up our libel laws” so that he can more easily sue news organizations for their “horrible and false articles.” But could he actually win a defamation suit against Schwartz?

Both Trump and Schwartz are domiciled in New York, so we’ll look at New York state law on defamation. Under New York law, public figures, such as politicians and celebrities, must also prove that actual malice existed on the part of the alleged defaming party.

In order to win any defamation suit against Schwartz, Trump must also prove that:

The alleged defamatory statements are false.

The alleged defamatory statements are not opinions.

The question of whether a statement expresses a fact or an opinion is one of the most difficult in defamation cases. A statement of fact is one that is capable of being proven true or false. For example, if Schwartz said that Trump actually paid X amount for a building, that can be verified through real estate transaction documents.

Furthermore, you cannot couch false statements of fact as opinions by saying, for example, “It’s my opinion that Trump raped his first wife.”

Lastly, in New York the aggrieved party has one year from the time the defamatory material was published to file a defamation suit.

What do you think? Do you agree with Trump’s desire to weaken First Amendment protections for speech about public figures? Do you think the ghostwriter speaks with malice or out of a concern for the public good?

One comment on “Does Trump Have Case Against Ghostwriter Who Called Him “Sociopath?””