Have you been banned by @realDonaldTrump or the social media accounts of any other public official?

Trump was sued by seven people who were blocked from the @realDonaldTrump Twitter account after posting critical comments. Knight First Amendment Inst. at Columbia Univ. v. Trump, 302 F. Supp. 3d 541 (S.D.N.Y. May 23, 2018). The blocked users could not view the president’s tweets, reply directly to them or use the account’s webpage to view the comment threads.

The 2nd U.S. Circuit Court of Appeals has just unanimously upheld the federal district court for the Southern District of New York’s decision finding that Trump violated the First Amendment when he blocked some Twitter users, because he uses his Twitter account “to conduct official business and to interact with the public.” It was a case of first impression in the Southern District of New York. 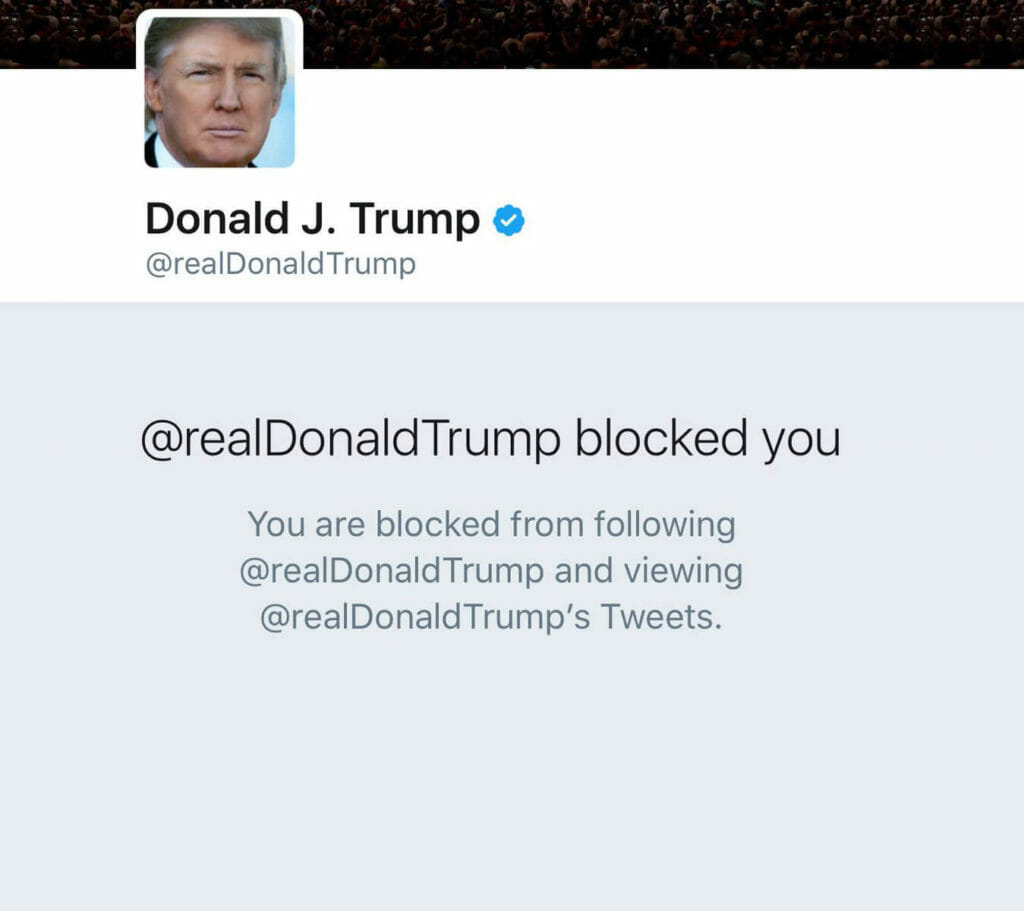 The district court had concluded that “the interactive space for replies and retweets created by each tweet sent by the @realDonaldTrump account” should be considered a “designated public forum” where the protections of the First Amendment apply. The Court also noted that Trump’s account is “one of the White House’s main vehicles for conducting official business.”

“[The] First Amendment does not permit a public official who utilizes a social media account for all manner of official purposes to exclude persons from an otherwise-open online dialogue because they expressed views with which the official disagrees,” the judges wrote. If the First Amendment means anything, it means that the best response to disfavored speech on matters of public concern is more speech, not less,” the judges wrote.

What Is A Public Forum?

Traditional public forums include such areas as streets, sidewalks and parks that have a history of dedication to political speech. Any restrictions on speech in a traditional public forum itself must meet a compelling state interest and must be narrowly tailored to achieve that interest—a standard called “strict scrutiny” that is very difficult for the government to meet.

In “limited” or “designated” public forums the government may limit the forum to certain subjects or classes of speakers, but it may not discriminate based on the viewpoint expressed.

Nonpublic forums are government-owned properties that are not traditional public forums or forums set aside for a particular form of speech. Examples include jails, airport terminals, and military bases. Regulations imposed by the government must be merely reasonable in such spaces.

The Supreme Court has held under certain circumstances that the protections of the First Amendment apply to spaces owned by a private company, such as shopping malls.

The government can designate new public forums by making “an affirmative choice” to create a space that is open for public expression. That is how the Supreme Court recognized that the Internet and social media has become a critical forum for the expression of protected speech.