How Texas Closed Most of Its Abortion Clinics

Currently, almost half the 6.7 million pregnancies each year in the U.S. are unintended, and almost half of these end in abortion. While abortions decreased by about 12 percent nationwide from 2010 to 2013-14, Texas abortions decreased by 30 percent in that five-year span. In Texas, women had nearly 9,000 fewer abortions in the first full year since new restrictions forced more than half of the state’s abortion clinics to close. Before the HB 2 law was passed, Texas had more than 40 legal abortion providers across the state. In a state with 5.4 million women of reproductive age, there remain just 10 open clinics offering abortion services in Texas. 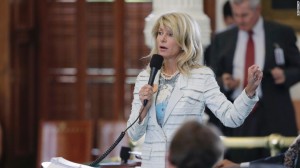 On June 25, 2013, Texas State Senator Wendy Davis held an eleven-hour-long filibuster to block a measure which included more restrictive abortion regulations for Texas. However, the bill eventually passed and became known as HB2. The Texas law and that abortion doctors have admitting privileges at local hospitals, but some hospitals are reluctant to grant them because of religious reasons, or because abortion is so controversial. HB2 also requires that clinics meet hospital-like surgical standards, but those upgrades can cost $1 million or more.

The law also included a ban on the procedure after 20 weeks of pregnancy and changed the rules for how doctors can prescribe abortion-inducing drugs. In Texas, an abortion-seeker must visit the abortion provider twice in more than 24 hours and listen to a doctor describe her fetus’s development during an ultrasound. 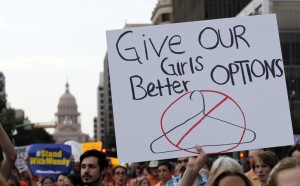 Pro-life groups have celebrated the clear effectiveness of such legislation, and are introducing similar bills in other states.

Last July, the U.S. Supreme Court said the 10 remaining clinics can remain open while clinic lawyers ask the court for a full review of a strict abortion law. In Whole Woman’s Health v. Hellerstedt, the Supreme Court is expected to answer critical questions regarding how far states can go to regulate abortion. During oral arguments before the Justices on March 2, Justice Samuel Alito, appointed by George W. Bush in 2006, lamented that the case record didn’t provide more evidence about why each clinic closed.

In this video, Samantha Bee does a funny interview with one of the Texas legislators responsible for the HB2 law: