The “Rules” of the Impeachment Trial Can Be Changed At Anytime

The first “rules” governing a Senate conviction trial were written in 1868 for the impeachment of President Andrew Johnson. The rules were updated after the Watergate scandal and President Nixon’s resignation. The Senate then updated the Rules in 1986, which were used for President Bill Clinton’s 1999 Senate trial. However, the Senate can change these rules at any time by a simple majority vote of Senators.

That’s why Senate leaders, Majority Leader Mitch McConnell, R-Ky., and Minority Leader Chuck Schumer, D-N.Y., are negotiating right now to lay the rules for the upcoming Senate trial. The Republicans have an easy majority in the Senate, but House Speaker Nancy Pelosi has said she will withhold the articles of impeachment until McConnell and Schumer come to an agreement.

There Are No Prosecutors

Instead of prosecutors, House Speaker Nancy Pelosi would name an unspecified number of House members as case managers who would, in effect, act as prosecutors at the trial. President Andrew Johnson’s Senate trial had seven case managers, while Clinton’s had 13.

The “Jury” of Senators Calls Witnesses, Not the Accused

In a normal criminal or civil trial, the parties can call their own witnesses. In a Senate impeachment trial, neither the impeached (President Trump) nor those impeaching (House of Representatives) can call witnesses. Rather, each witness must be called by a majority vote of the Senate.

The “Jury” of Senators Can Submit Questions to Witnesses

In the usual civil or criminal trial, the jurors cannot ask witnesses any questions. But in a Senate conviction trial, Senators can submit written questions to witnesses. Senators cannot, however, directly question witnesses.

There Are A Lot More Than 12 Jurors

The jury in most state and federal civil or criminal trials is made up of 12 jurors. The “jury” in an Senate trial is made up of the United States’ 100 elected senators – two from each state. Currently the Senate is comprised of 53 Republicans and 45 Democrats and 2 Independents. 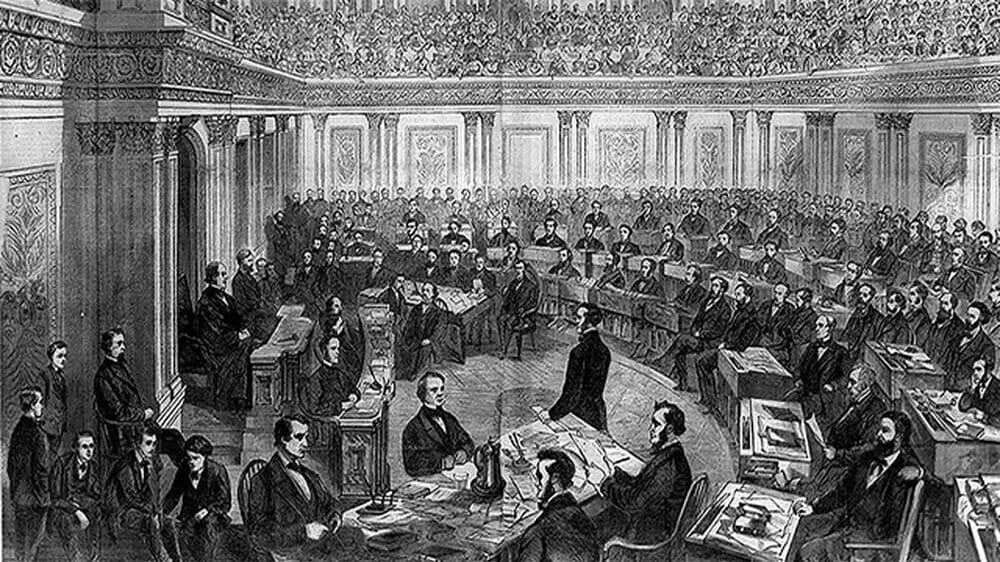 Only 34 Senators out of 100 need to vote to acquit the President. It would take 67 Senators to vote to convict, meaning 20 Republicans would have to join Democrats — a highly unlikely outcome.

The Judge Has A Lot Less Power

The Impeachment Trial Can be Televised (Sort Of)

Trials in federal court are never televised. Some state courts allow televised trials (e.g., the OJ Simpson trial.) According to the 1986 Senate rules, however, the cameras in an impeachment trial can only focus on any person speaking.

The Trial Can Be Skipped

Who needs a trial? A simple majority of senators can vote to end the trial and move to a final vote.

If it seems like the Senate majority can just make up the rules as they go along, it’s because they can. What do you think? Should the Senate have so much power to change the rules of a trial?