Frivolous Lawsuits: What they are and Why they are Destroying Small Business! 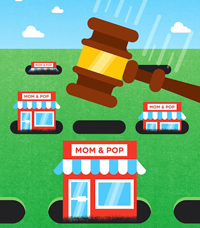 Many of you may have seen the August news story about a Missouri woman who is suing a café for being hit in the eye with a “hot, thrown roll.” That sentence alone may make you think her claim is legitimate; I know I wouldn’t want to take a hot roll to the eye. But that’s not the whole story.

The chain in question,  Lambert’s Café, has locations in MO and AL and is known as “The Home of the Thrown Roll.” Patrons come from all over the World to catch (and eat) hot thrown rolls on a daily basis. This author has even been to one during college back in the 1990’s. And yes, there were rolls thrown and you did need to catch them.

The restaurant’s own website is also telling: www.throwedrolls.com. It’s a known fact that workers throw 200 dozen homemade rolls a day during the week and 300 dozen a day on weekends. The restaurant has been doing this since the 1940’s and the entire restaurant is covered with signs that say “Home of the Throwed Roll.”

This means that if you plan on visiting a Lambert’s Café location now or in the future, you should expect to see ROLLS, usually hot and right out of the oven, being THROWN at or near you regularly. That’s what happened when Troy Tucker, a 67-yr old pastor, visited Lambert’s with her family in September 2014. She saw and was exposed to practically dozens of thrown rolls during her visit. 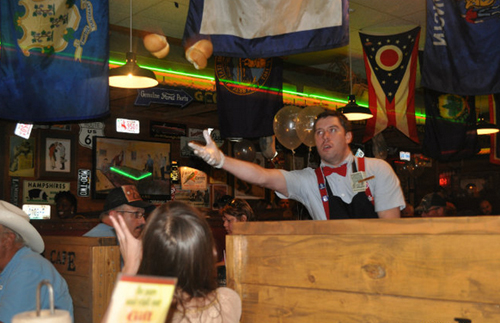 Unfortunately, in her case, she claims she was hit in the eye and injured by one of these thrown rolls. The result being she “sustained a lacerated cornea with a vitreous detachment and all head, neck, eyes and vision were severely damaged.”

Pastor Tucker is currently suing Lambert’s Café for $25,000 in damages.

This case is an example of what is called a Frivolous Lawsuit and the odds of a successful result for the plaintiff is very low. For the purposes of this article, a frivolous lawsuit can be defined as follows:

“Any lawsuit that is filed with the express purpose of harassing, disturbing or annoying another party is called a frivolous lawsuit. The lawsuit in question is also usually brought by a plaintiff (or their attorney) who knows fully well that the chance of the lawsuit succeeding in court is very low.”

In this case of Lambert’s Café, most people understand that by voluntarily entering a certain premises in which things like “thrown rolls” may be seen sailing through the air, the odds of you actually getting hit by one are relatively high.

This is the same logic used when you attend a baseball or other sporting game: you may accidentally get hit by a foul ball or a hot dog thrown by a mascot. This is called the “baseball rule” and it states that when you enter such venues you accept the risk of injury through your own personal awareness.

Frivolous lawsuits are a real problem in our legal system and it is estimated to cost small business in the United States well over $105 billion a year (and that’s based on 2008 numbers). Suits like the above are the result of poor legislation which fails to punish attorneys who may seek to bring such claims to the courts. 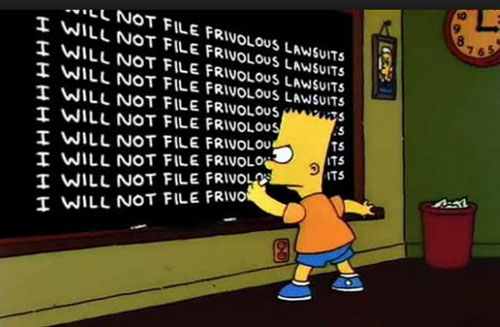 How did the above become such a large issue? Well, it used to be that Rule 11 of the Federal Rules of Civil Procedures plainly provided for sanctions against attorneys who sought to bring frivolous or harassing legal claims against parties to be mandatory in scope.

Unfortunately, that changed in 1993 when Rule 11 was amended to make the sanctions discretionary and NOT mandatory by allowing a “safe harbor” provision of 21 days to be implemented. This means that if you file a frivolous lawsuit, and then get challenged, you have 21 days to withdraw the suit without fear of penalty.

That’s certainly great for the plaintiff’s lawyer who is filing a baseless claim, but does nothing for the affected small business, who may suffer significant damage to their reputation in that intervening 21 day period.

Fortunately, there is hope on the horizon via U.S. House Resolution 758, The Lawsuit Abuse Reduction Act of 2015. First introduced by TX representative Lamar Smith in May, the bill is set to be considered in the coming weeks and would seek to REMOVE this “safe harbor” exception and make all frivolity sanctions MANDATORY.

Tort reform is something we take serious here at The Reeves Law Group. When attorneys bring forth frivolous lawsuits of a personal injury nature this practice hurts us all. To that end, we will be watching the march of HR 758 with much interest, and we urge you to as well.