Valentine’s Day Proposals … Can You Get the Engagement Ring Back?

Getting the Ring Back If the Wedding Is Called Off

California has a law dating back to 1939 which specifically addresses engagement rings and other gifts in contemplation of marriage. Civil Code section 1590 states:

“Where either party to a contemplated marriage in this State makes a gift of money or property to the other on the basis or assumption that the marriage will take place, in the event that the donee refuses to enter into the marriage as contemplated or that it is given up by mutual consent, the donor may recover such gift or such part of its value as may, under all of the circumstances of the case, be found by a court or jury to be just.” 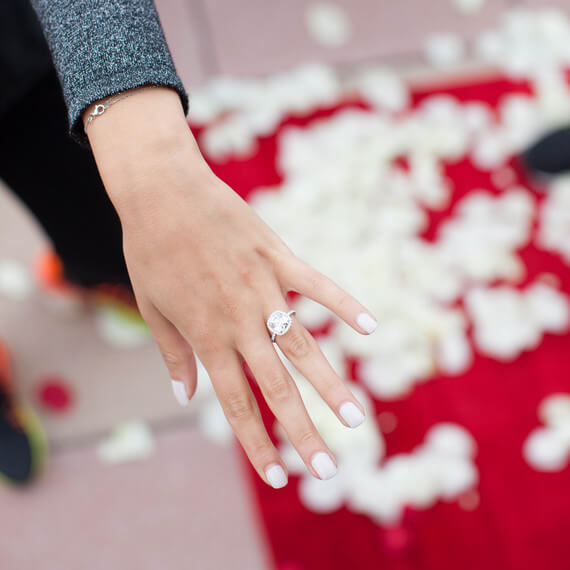 This California law applies to gifts other than engagement rings. For example, in Shaw v. Shaw (1964) 227 Cal.App.2d 159, a couple lived together for four years. The man placed his girlfriend’s name on real property because he relied on her promise that she would marry him when her divorce was final. The couple separated before marrying and the woman eventually married another. The court awarded all property back to the man because she failed to marry him. Remember that if two people actually do get married, California Civil Code section 1590 ceases to apply.

It’s not clear, though, what happens if the person who received the engagement ring calls of the wedding because of some bad deed by the proposer, such as cheating or running over your dog. Should you really have to return the ring after finding out the person who proposed to you cheated??

So you don’t need a prenup in order to keep the engagement ring or other property given in contemplation of marriage if the proposer or both people call it quits. But it never hurts to have a prenup anyway, like the one Khloe Kardashian had that allowed her to keep all jewelry gifts from husband Lamar Odom, including her $850,000 engagement ring.

Of course, if one person refuses to give back the engagement ring, the person who proposed will have to go to court. In most cases, the engagement ring has a value under $10,000, which means the case must be filed in small claims court.

Most other states treat engagement rings as conditional gifts that must be returned if the parties never get married.

Beware of Proposing on Special Days

Many people propose on special days such as a birthdays or holidays like Christmas or Valentine’s Day. But beware that while many states have laws that require the return of any property given in contemplation of marriage, a question arises if it was given on a birthday or holiday. Was that jewelry really given in contemplation of marriage or was it just a regular gift? After all, many gifts are exchanged on birthdays and Christmas and Valentine’s Day. You may want to memorialize the fact that a gift was given on the basis that you will get married, such as having witnesses to the proposal or even sending a text or email afterward.

What do you think? Should getting the ring back depend on why the marriage was called off? How much would you spend on an engagement ring?

One comment on “Valentine’s Day Proposals … Can You Get the Engagement Ring Back?”