Early Voting Laws: How Millions of Americans Have Already Voted

More than 40 million estimated votes have already been cast already across 38 states with early voting. Although early ballots are not actually counted until Election Day, various data companies analyze voter lists and try to connect returned ballots with demographic and registration information, such as party registration. Their findings indicate who is voting and which party is turning out to vote. 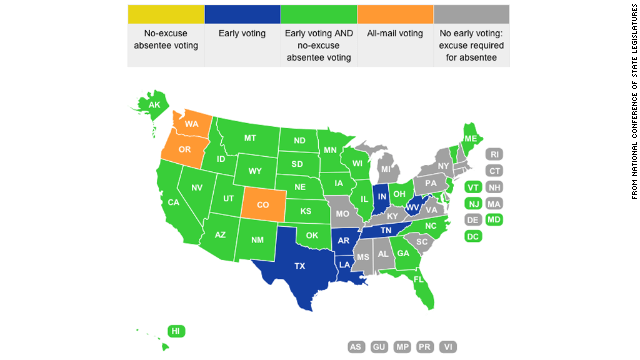 Thirty-seven (37) states currently permit some way to cast a ballot prior to Election Day. In only 13 states, early voting is not available and an excuse, such as residing abroad, is required to request an absentee ballot.

There are three ways that American citizens can vote early prior to Election Day:

All states permit members of the military who are stationed overseas, their dependents, and other U.S. citizens living abroad to vote by absentee ballot.

Why Is Early Voting Offered?

It was only in 1845 that the federal government set a uniform, single day for voting for president: the first Tuesday following the first Monday in November. However, on Tuesdays people are usually really busy with work, school, or cool hobbies. Prior to 1845, voting was usually held over several days so rural folks could travel to cities to cast their ballots.

As you can see from the below video, the goals of early voting are usually to increase voter participation and relieve congestion at polling stations on election day.

In California, you can vote early in person or by mail without having to present any excuse. Voters can even obtain permanent absentee status, which means that once a voter asks to be added to the absentee voter list, s/he will automatically receive an absentee ballot for all future elections. In California early voting begins 29 days before Election Day and ends the Monday before Election Day.

Did you vote early? Do you think the election should be spread out over more than one day or fall on a weekend instead?

One comment on “Early Voting Laws: How Millions of Americans Have Already Voted”