What is the Diversity Visa aka Green Card Lottery?

On Tuesday Sayfullo Habibullaevic Saipov, a 29-year-old Uzbekistan native, inspired by ISIS, drove a rented truck onto a bike path in New York City. Eight people were killed and more than a dozen injured. According to the Department of Homeland Security the suspect arrived in the U.S. as part of the diversity immigrant visa program.

The terrorist came into our country through what is called the “Diversity Visa Lottery Program,” a Chuck Schumer beauty. I want merit based.

Each year the Diversity Immigrant Visa Program awards up to 50,000 individuals a visa for a green card, which bestows permanent residency and is a path to citizenship. The bill establishing the program was signed into law in 1990 under President George H.W. Bush. The winners are drawn by random selection among all entries to individuals who are from countries with low rates of immigration to the United States. 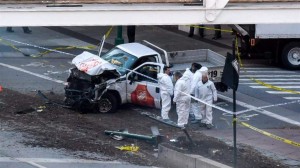 As of 2017, around 20 million people apply for the lottery each year, and around 100,000 people (including family members of the winners) receive permanent residence as a result of the program.

What Are the Requirements to Apply for the Diversity Visa Lottery?

First, only residents born in certain countries are eligible to participate in each year’s visa lottery. This is because the program aims to select applicants from countries with low rates of immigration in the five years prior. For example, immigrants from the following countries are not eligible to participate in the Green Card Lottery DV-2018 Program: Bangladesh, Brazil, Canada, China (mainland-born), Colombia, Dominican Republic, Ecuador, El Salvador, Haiti, India, Jamaica, Mexico, Nigeria, Pakistan, Peru, Philippines, South Korea, United Kingdom (except Northern Ireland) and its dependent territories, and Vietnam.

There is also a limitation that no single country may receive more than 7% of the total Diversity Visas (3,500).

If selected by lottery, potential immigrants must have completed at least a high school education or at least two years of work experience in an occupation which requires at least two other years of training or experience.

And, like all prospective immigrants to the U.S., they must also satisfy general immigration requirements, such as means of support, no criminal background, and good health. For example, applicants who are selected must demonstrate that they have financial sponsors already in the U.S. or sufficient assets to support themselves. They must also attend a medical examination and obtain a police certificate showing no criminal record.

There is no charge to enter the Diversity Visa lottery, and the only way to do so is by completing and sending the electronic form available at the U.S. Department of State’s website during the registration period.

Why Was the Diversity Visa Lottery Program Enacted Anyway?

Believe it or not, the program was enacted in order to help more people immigrate to the U.S. from Ireland!

The 1965 Immigration Act had put the focus of immigration policy on skilled workers and family sponsorship visas, meaning green cards were mainly being allocated to just a handful of countries – Mexico, India, China and the Philippines. In the past, US immigration policy had discriminated against people from Asia. For example, for at least fifty years from the 1880s to 1950s, immigration from countries like China and India was simply banned.

According to Brian J Donnelly, a former congressman from Massachusetts, thousands of illegal Irish immigrants lived in Boston after a resurgence in Irish immigration in the late 1980s. Some in Congress believed that those from western Europe and Africa had limited immigration options, and that a lottery system would be more fair. However, even Donnelly criticizes the program as having failed to diversity the already huge incoming immigrant population and thinks it should now be repealed. In 2015, about 550,000 people immigrated to the US, and 11 million temporary visas – including work and student visas – were given out, so the 50,000 visas from the lottery program makes a minimal impact.

How Many Green Card Holders Have Committed Terrorism After Entering the U.S.?

Other than the NYC truck terrorist, there has been one documented example of an individual who migrated through the diversity visa system and was later arrested on terrorism-related charges. Including Tuesday’s attack, from 1975 through October 31, 2017, those who entered on a green card killed 16 people, or about 0.53 percent of all people murdered in terror attacks on U.S. soil committed by a foreigner. That means the annual chance of being murdered in a terror attack on U.S. soil committed by a foreign-born person stands at 1 in 3,808,094 per year from 1975 through October 31, 2017.

What do you think? Does the diversity visa lottery achieve any goals that are important to American society? Should the requirements change or should the entire program be repealed?