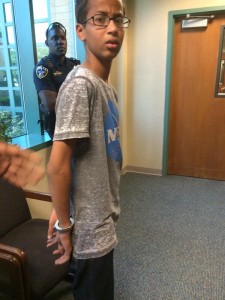 Ahmed Mohamed, the teenager arrested when a teacher mistook his homemade clock for a bomb, is seeking written apologies, $5 million in damages from his former school district, and $10 million from the city of Irving, Texas. See the full demand letter.

His lawyers insist that the school, police force and city officials violated Mohamed’s rights by wrongfully accusing and detaining him and then decided to “trash” him when the media got wind of the story. The demand letter notes that Beth Van Duyne, mayor of Irving, Texas, called the clock a “hoax bomb” during an appearance on the Glenn Beck television show and nodded as Beck and his other guest called the story “an influence operation” in furtherance of a coming “civilization jihad”. Ahmed’s lawyers also claim that the City’s actions not only defamed the Mohamed family, but put them in danger, citing threatening emails and the leaking of their home address.

In the version of events by Ahmed’s lawyers, the son of Sudanese immigrants and young robotics fan brought in a homemade clock to impress a new teacher at MacArthur High School. When another teacher saw the clock in her class, she overreacted because Ahmed was Muslim. According to Ahmed’s lawyers, he would never have been investigated, put in handcuffs, or suspended if he was, say, white.

Almost immediately, famous figures like President Obama and Hillary Clinton tweeted their support. Invitations poured in from Facebook, Google, and the United Nations. Ahmed was inundated with various offers for free Space Camp, tours with scientists, and even a scholarship to a university in Europe. In the weeks following his arrest he met Google co-founder Sergey Brin at a science fair and was photographed with his arm around the Sudanese president, Omar al-Bashir, a dictator wanted for war crimes including genocide. Overnight, 14-year old Ahmed Mohamed became the poster boy of so-called Islamophobia.

Cool clock, Ahmed. Want to bring it to the White House? We should inspire more kids like you to like science. It’s what makes America great.

But after photos of Ahmed’s clock was released, various Internet bloggers, including engineers, published theories that Ahmed had simply removed the wiring from an old alarm clock and stuck it inside a pencil case. In the backlash, Ahmed and his father were even accused of scheming to scare people with a hoax bomb in order to take advantage of the ensuing publicity and sympathy. Many online commentators have even called Ahmed and members of his family terrorists. 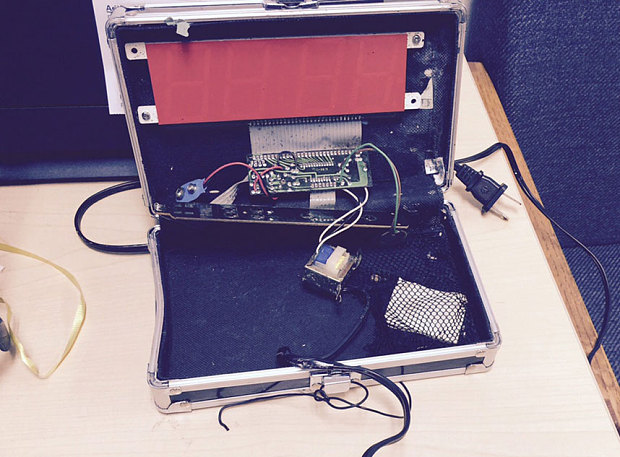 Ahmed and his family have already moved to Qatar. Ahmed accepted a scholarship for his high school and university education by the Qatar Foundation, a public-private education partnership in the Middle Eastern state.

It’s unlikely that this case will go to trial given the expense and unwanted publicity, but if it did, here are some of the questions that may be raised:

Don’t call him “clock boy” since he never made a clock. Hoax Boy, having hoaxed his way into the White House, now wants $15M in addition!