California Burning: What You Should Know About Homeowner’s Insurance and Fire Claims

Not the typical morning commute… pic.twitter.com/kJIOQeqsIK

California’s latest fire has ripped through Ventura County north of Los Angeles and triggered evacuation orders for over 150,000 people. In October fires ripped through parts of northern California’s wine region, killing at least 42 people and destroying over 10,000 structures. 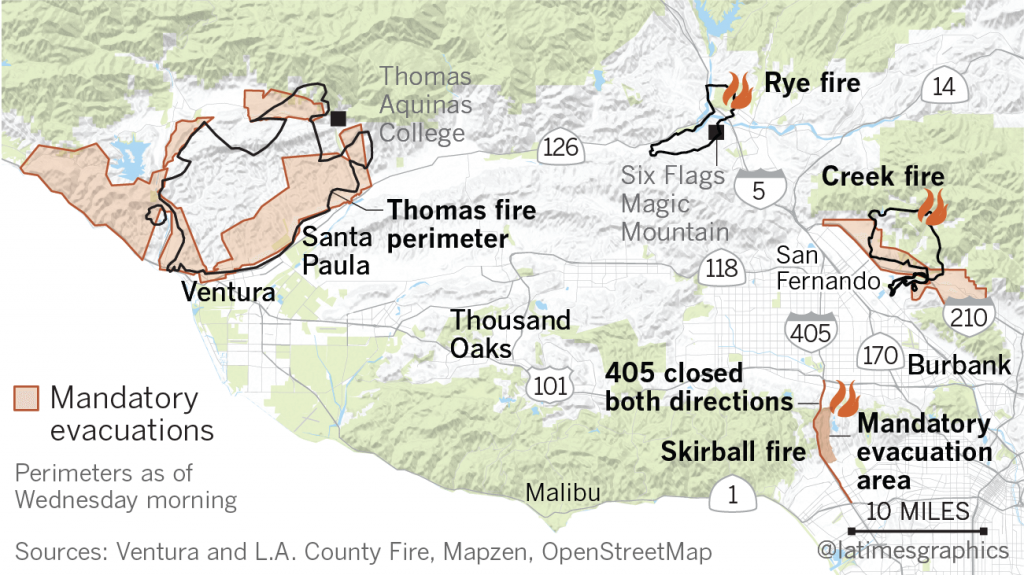 By November 1, 2017, wildfires in California caused insured losses of more than $3.3 billion, based on claims reported by 15 insurers. But California is also the largest U.S. insurance market, where insurers collect about $289 billion in premiums per year. After the huge fires in Northern California some insurers, like Allstate, simply stopped issuing new policies. Other insurers became choosier about which homes they’d cover.

Most people assume their homeowner’s insurance policy covers all fire damage. But here are some facts that are less known:

If you live in a high-risk area, such as near a canyon, you may need to pay more for additional coverage. While the average deductible for fire insurance in California ranges from $1,000 to $2,000, those with more expensive homes and those living in extreme high-risk areas have higher deductibles around $5,000.

If insurers want to increase premiums for certain areas, however, they must have the higher rates approved by the California Department of Insurance.

Most people assume that their homeowners policies were written to actually replace their entire home. In fact, most policies don’t provide for full replacement. Many homeowners will reach their policy limits, which are inadequate to replace the house.

You do not have to use or accept the opinions of consultants or contractors recommended or approved by the insurer to perform repairs. Even if an insurer promises to guarantee the approved contractor’s work, the guarantee is generally limited to replacing defective materials or correcting faulty workmanship. The insurer will not insure against any contractor delays, negligence, or liability.

California law provides that policyholders may use their insurance payout to rebuild in the same location, a new location or purchase an already built home in another location.

Many claimants will receive an initial sum of money from the insurer, but then three to six months or even more will pass before the insurance claim is fully processed and paid out.

If a fire has destroyed many homes near yours, the home-replacement dollars you receive may not be adequate as costs soar for everything from materials to labor. But you can pay for extended replacement cost endorsement, which pays out extra for at least a portion of unexpected cost increases.

A nearby fire may not burn down your property, but what if the ash and smoke damage your home? Not all policies cover such damage.

If your home is burned down and you have to rebuild, the safety codes may have changed significantly since your home was first built. If you’re worried about having the extra money to pay for those code upgrades, you can also purchase additional coverage for them.

If a fire forces you out of your home, will you have enough money for hotel rooms, meals, car rental, etc? Check if your homeowners policy includes so-called ALE coverage, as in “additional living expenses,” which will include costs such as hotel rooms, clothes, food, and possibly even long-term rental housing. And under California law, in a state of emergency, policyholders have up to 24 months to use their additional living expenses benefits. Under ALE, policyholders are also entitled to like kind and quality housing.

You should also be aware that insurers sometimes change the terms of a policy during the renewal process. Few people read their policies from cover to cover, and even fewer read the renewal policies as they assume nothing has changed. So always review any endorsements that arrive in the mail. Endorsements are amendments to a policy that affect or change coverage.

If you know a fire may affect your home, you should take video or photos of the belongings in your home so that your personal property claim is processed more quickly.

What About Homeowners in High-Risk Areas Who Can’t Find or Afford Coverage?

For homeowners in areas of high fire risk who cannot find coverage in the open market, there is a state-sponsored program called the California FAIR plan. The FAIR Plan provides basic fire insurance coverage for residential and commercial structures, as well as personal property coverage. FAIR covers up to $1.5 million for a structure and its contents, which in some cases won’t be enough for full replacement of a lost home and property.

Have you experience a loss from fire? How was your insurance claim handled?