What Laws Apply to Benefit Concerts like Ariana Grande’s

After an Islamist terror attack that killed 22 people, including children, Ariana Grande will return to Manchester this Sunday for a huge benefit concert. Fifty people are still being treated in hospital, including 17 in critical care.

The “One Love Manchester” benefit concert will include other stars like Justin Bieber, Katy Perry, Coldplay, Miley Ray Cyrus, Pharrell Williams, Usher, Black Eyed Peas, Take That, and Niall Horan from One Direction, Robbie Williams, and Little Mix. It will take place at the Emirates Old Trafford Cricket Ground. Tickets sold out minutes after going on sale on TicketMaster UK. 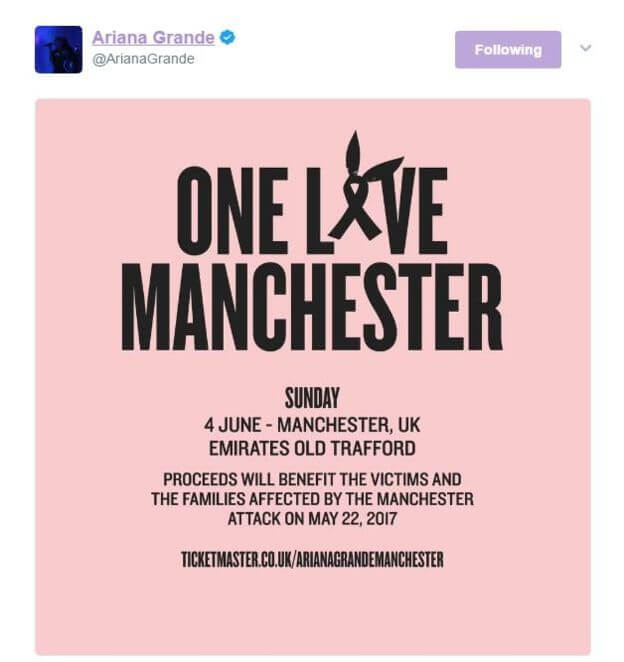 The benefit concert is expected to raise at least £2 million, which will go to the We Love Manchester emergency fund, which was set up by Manchester City Council, in conjunction with the British Red Cross. Those attending are asked not to bring bags. Grande is also offering free tickets to fans who were at her Manchester Arena show on 22 May.

While not always illegal, benefit concerts often need to address ticket re-selling, where ticket re-sale sites purchase a large volume of tickets from the official vendor, then mark up the price for resale. Resale sites commonly use multiple identities and credit cards to circumvent limits on the number of tickets one person can buy. 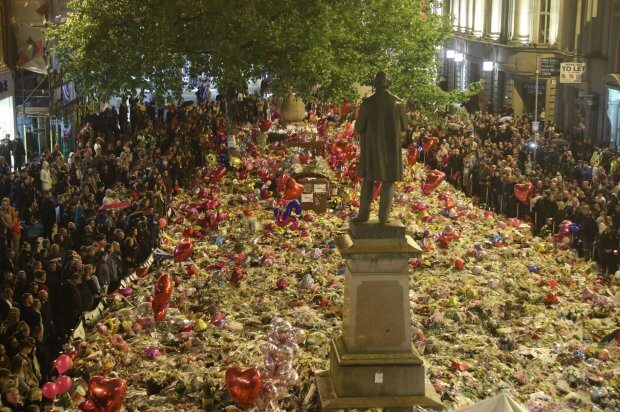 For example, a secondary ticketing website called Viagogo was accused of seeking to profit from an Ed Sheeran benefit concert in aid of teenage cancer patients by reselling tickets for thousands of pounds. The cancer charity introduced extra security measures to beat resellers, such as requiring people with tickets to produce photo ID to prove that they bought the ticket. But Viagogo then advertised that “buyers of tickets for this event will be accompanied into the venue by the seller” in order to circumvent efforts to crackdown on resold tickets.

Some tickets for the One Love Manchester benefit concert have appeared on eBay – but Ticketmaster told the BBC it is attempting to remove listings as soon as they appear. Some tickets, which have a face value of £40, were being offered on eBay for up to £200 each. Ticketmaster UK also said it was “cancelling tickets of those who are reselling wherever possible”.

Are Benefit Concerts Required to Donate the Ticket Profits?

Many countries and states have laws governing charity fundraising, including benefit concerts. In California, for example, charity fraud can be reported to the state Department of Justice, which prosecutes such fraud.

Aaron Tonken had become one of the best fund-raisers around. He hobnobbed with the Clintons and movie stars. Tonken organized the 2001 A Family Celebration charity event and was supposed to distribute the $1.5 million collected to various charities. However, Tonken diverted most of the money to pay off his debts and fund his indulgences, like $3,000 escorts. He later pleaded guilty to fraud and was sentenced to 63 months in prison and ordered to pay restitution, in addition to a $500,000 fine.

Sean Hannity, the Fox pundit, helps organize concerts to raise money for Oliver North’s Freedom Alliance Scholarship Fund, which provides college money for the children of soldiers killed in the line of duty. Although Hannity claims that every single penny from the concerts goes into the fund, Citizens for Responsibility and Ethics in Washington (CREW) found that Freedom Alliance used only $2.1 million of the $9 million collected between 2003 and 2009 for the scholarships.

What do you think? Are charity concerts a great idea, or should people just donate directly to the charities?